CLEVELAND -- Coco Crisp quickly became a fan favorite with
Indians fans, winning them over with his catchy name, bubbly
personality and solid skills.

The Red Sox Nation will be tougher to impress.

Crisp is bound for Boston after being traded Friday by the
Cleveland Indians to the Red Sox, finally giving them a replacement
for Johnny Damon in center field and at the leadoff spot in the
batting order.

Crisp's departure has been rumored for more than a week, but the
deal was first held up by medical questions Cleveland had about
reliever Guillermo Mota, and then was delayed by a trade between
the Indians and Philadelphia Phillies.

When it all shook out, eight players -- and maybe a ninth -- were
moved by three teams and the Red Sox gave the Indians at least $1
million. Commissioner Bud Selig had to approve the deal before it
could be announced.

Along with Crisp, Cleveland sent reliever David Riske and backup
catcher Josh Bard to Boston for Mota, third base prospect Andy
Marte, catcher Kelly Shoppach, a player to be named and cash.

Before that deal was finalized, the Indians sent reliever Arthur
Rhodes to Philadelphia for outfielder Jason Michaels, the probable
replacement for Crisp as Cleveland's starting left fielder.

Rhodes had to pass a physical with Philadelphia before the
Indians could pull the trigger and trade the 26-year-old Crisp, who
batted .300 with 16 homers, 69 RBI and 15 steals last season.

"He's an energy player, and he can impact the game on both
sides of the ball," Indians general manager Mark Shapiro said.

Crisp, acquired by the Indians in 2002 from St. Louis, posted
career highs in runs (86), hits (178) and homers in 2005. The Red
Sox are counting on him doing even more to fill the void left when
Damon signed as a free agent with the New York Yankees.

"He's just entering his prime right now and he definitely has
upside beyond what he has done thus far," Shapiro said. "He can
become a better, more effective basestealer. The question and the
unknown is always going to be how much more power he's got."

While the Red Sox targeted Crisp as their No. 1 option to
replace Damon this winter, the Indians were equally high on the
22-year-old Marte, considered one of the top minor leaguers in
baseball. 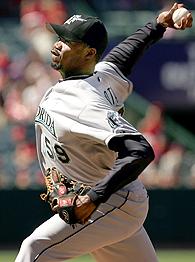 Marte spent most of last season at Triple-A Richmond before
Atlanta dealt him to the Red Sox for shortstop Edgar Renteria last
month. He batted .275 with 20 homers and 74 RBI in 109 games last
season.

Marte is expected to spend this season in Cleveland's minor
leagues, but he finally gives the Indians a potential everyday
player at what has been a problematic position for the club in
recent years.

"In Andy we are acquiring a right-handed power hitter who is
also a good defensive third baseman," Shapiro said. "It is
difficult to acquire a player of Andy's caliber and skill set via
trade or free agency and third base is a position of need in our
organization."

In his only season with Cleveland, the 36-year-old Rhodes went
3-1 with a 2.08 ERA in 47 games. He was a key contributor in the
AL's best bullpen for four months in 2005, but missed the last two
for family reasons.

Michaels, a right-handed hitter, batted .304 with four homers
and 31 RBI in 105 games for the Phillies. The 29-year-old recently
was put on six months' probation and ordered to complete 100 hours
of community service following a fight with a Philadelphia police
officer last year.

"No, absolutely not," he said. "We just felt this situation
fit in the direction we wanted to go. We wanted to solidify the
back end of the bullpen and we think Rhodes helps us do that."

Shapiro thinks Michaels can have an immediate impact on
Cleveland's lineup.

"Jason is a hard-nosed, tough player that complements our
lineup extremely well," Shapiro said. "He has always been a tough
out while recording a high on-base percentage and has the ability
to play all three outfield positions well."

As long as he's healthy, Mota, 32, should help the Indians fill
the void left by Bob Howry's departure. Howry was the team's setup
man in '05, but signed as a free agent with the Chicago Cubs.

Mota never pitched for the Red Sox, who acquired him in the
trade with Florida for Josh Beckett. The right-hander went 2-2 with
a 4.70 ERA and two saves in 56 games for the Marlins, but missed
more than a month with a sore elbow. He will make $3 million next
season.

Because of their concerns over Mota's health, the Indians pushed
and got the Red Sox to sweeten the deal. If Mota goes on the
disabled list, Cleveland will be able to add a pitcher from
Boston's minor league system.

As Cleveland fought for a playoff spot last season, Indians
manager Eric Wedge lost confidence in Riske, a right-hander who
went 3-4 with a 3.10 ERA in 58 games. The 29-year-old struggled
while trying to close early in 2004, but has been one of the
league's steadiest middle relievers the past few seasons.

Despite being better defensively, Bard spent all of '05 backing
up Martinez. He batted .193 with nine RBI in 34 games, but has
become expendable with the emergence of minor leaguer Ryan Garko
and Cleveland's signing of Einar Diaz this offseason.

Rhodes gives Philadelphia a dependable setup man for Tom Gordon,
who is taking over for Billy Wagner as the club's closer. And with
Rhodes, the Phillies can now move Ryan Madson to the starting
rotation.

Madson, 25, was 6-5 with a 4.14 ERA in 78 games last season. He
began the year as the setup man for Wagner, but gave up that role
when the Phillies acquired Ugueth Urbina in June.