Barry Bonds might retire after this season. Or maybe not.

The San Francisco slugger gave differing accounts this weekend, first saying this year would be his last -- regardless of whether he hits the 48 home runs he needs to break Hank Aaron's record.

Then Sunday night, he said he would play in 2007 if his surgically repaired knee is OK.

The Giants slugger told USA Today on Sunday he plans to retire after this season -- with or without the home run record.

"I'm not playing baseball anymore after this," Bonds told the paper in a telephone interview from his California home. "The game [isn't] fun anymore. I'm tired of all of the crap going on. I want to play this year out, hopefully win, and once the season is over, go home and be with my family. Maybe then everybody can just forget about me."

Bonds, however, later tried to soften that stance.

"If I can play [in 2007], I'm going to play; if I can't I won't," Bonds said in a story posted Sunday night on MLB.com after USA Today posted its story. "If my knee holds up, I'll keep on going. I'm playing psychological games with myself right now. I don't want to set myself up for disappointment if things don't work out this season. So I go back and forth. Back and forth every day. These are the things that are going through my mind. This is what I'm struggling with."

Bonds told MLB.com he thought his conversation with the USA Today reporter was personal and that he was simply trying to convey his state of mind at that time.

Bonds, who is in the final year of a five-year, $90 million contract, told USA Today that he is worn out -- tired of being a focal point because of his pursuit of Aaron's record and allegations of steroid use that have dogged him for years.

"I've never cared about records anyway," Bonds told USA Today, "so what difference does it make [if he finishes shy of Aaron's 755 career homers]? Right now, I'm telling you, I don't even want to play next year. Baseball is a fun sport. But I'm not having fun.

"I love the game of baseball itself, but I don't like what it's turned out to be. I'm not mad at anybody. It's just that right now I am not proud to be a baseball player," he said.

Bonds, who said he plans to report Tuesday to the Giants' camp in Scottsdale, Ariz., missed most of last season after undergoing three knee operations and said he is still in pain. He said he isn't sure how many games he'll be able play this season.

"I can't even tell how you many pain pills I am on or how many sleeping pills I'm taking," he told USA Today. "I don't have a choice. I can't even run that much anymore. How can I run? I don't have any cartilage in that knee. I'm bone on bone.

Bonds' agent, Jeff Borris, wouldn't say whether Bonds has discussed retirement with him.

"I'd rather those conversations between Barry and myself remain private," Borris told The Associated Press on Sunday.

"I think everybody wants to see him," Alou said. "I haven't seen him since October, but we've talked on the phone. There's no urgency to talk except for the normal welcoming. There's a lot of time to discuss things."

Bonds set the single-season homer record in 2001 with 73 homers that season but hit only five in 14 games last season.

He enters this season with 708 career home runs, third all-time behind Babe Ruth (714) and Aaron. He admits it would be a "great honor" to pass Ruth and knows his pursuit of history is great for the game, but he told the paper breaking the record "means more to baseball than it does to me."

"That's what the game is supposed to be about in the first place, isn't it?" he said.

Playing baseball hasn't been that simple for Bonds in years.

The outfielder, who turns 42 on July 24, has long been in the spotlight for his ability to hit the ball in monumental fashion, but in recent years the attention he has received has had more to do with accusations of steroids use and the BALCO scandal.

Bonds testified in 2003 before a federal grand jury investigating illegal steroid distribution. The San Francisco Chronicle reported in December 2004 that Bonds testified he used a clear substance and a cream given to him by a trainer, but he said he
didn't know they were steroids.

Greg Anderson, the slugger's personal trainer, pleaded guilty last July to steroid distribution and money laundering and in October was sentenced to three months in prison and three months of home confinement.


"I'm clean, I've always been clean," said Bonds, who has repeatedly denied knowingly taking steroids. "But it never ends. It seems like every reporter from last season to this season has reported and opened up a new can of [expletive]. And I haven't even been to spring training. At least let me get to spring training and [expletive] up before you crucify me. 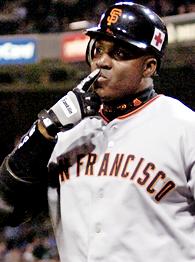 "I know there's a lot of conflicting things out there," Selig told the paper, "but there is no empirical data that Barry did anything wrong. People can have their own ideas, and they are free to draw their own conclusions. I understand that. But there should be a sense of fairness.

"People say that we ought to conduct investigations and do this and that. We have the toughest [drug-testing] program in American sports now, but before 2003 there is no data. We can have all of the investigations in the world, but there is nothing to investigate. I am not going to play God, and that's what some people are doing," he said.

It seems the constant questions, as well as other off-field issues -- including a custody battle over his son, Nikolai, and the questions surrounding his health -- have become too much for the seven-time NL MVP.

"I think that's been my only downfall in all of this," he said. "I never let people know me. I just wanted to do my job and get the [expletive] out. Don't get me wrong. I love Michael Jordan, and I respect Michael Jordan. But I never wanted all that attention."

Bonds, who plans to hold a press conference once he reports to San Francisco's spring training camp in Scottsdale, Ariz., on Tuesday, won't speculate on how many games his ailing knees will be able to handle.

"All I know is that I'm trying to get to the World Series again. I want that ring. So I don't want to sit on no bench. When I sit on the bench, I hurt my teammates. I want to win," he said.

Bonds chose not to join the United States team in next month's inaugural World Baseball Classic, telling USA Today he decided against playing because of his knee.

At first he said he planned to play but changed his mind Jan. 24 and withdrew.


He said his decision had nothing to do with the more stringent drug testing he would face in the international competition.

"This has nothing to do with drug testing," Bonds said. "I just don't want to do it. Come on, the World Cup isn't the Olympics. Who cares? Does it mean anything?

"Is it going to cost me in endorsements? Whoop-de-doo. I never had any endorsements, anyways. I don't base my life on that. I go to work like every other American," he said.