FORT MYERS, Fla. -- He was the smooth voice of sports history, a welcome companion who brought listeners Ted Williams' last home run, the first Super Bowl and dozens of other dramatic moments. 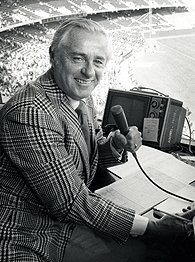 Curt Gowdy, who died Monday, told generations of Americans about the games they loved from the broadcast booths at 13 World Series, 16 baseball All-Star Games, numerous Rose Bowls and the 1976 Montreal Olympics.

"He was the first superstar of sports television because he did all of the big events," veteran NBC broadcaster Dick Enberg said. "He's the last of the dinosaurs. No one will ever be the voice of so many major events at the same time ever again."

Gowdy died of leukemia at his winter home in Palm Beach. He was 86.

It all started as he sat on a box, with his microphone on another box, for his first play-by-play -- a six-man football game in Cheyenne, Wyo., in subzero temperatures in 1944.

Before cable television spawned a new breed of announcer -- those who use shouts and hip phrases instead of subdued sounds and straightforward description -- Gowdy was a star who just wanted to tell a story, a well-liked man who stayed that way as his fame grew.

He brought a warm feel to the broadcast booth, his commentary full of good humor and enthusiasm.

He once said, "I tried to pretend that I was sitting in the stands with a buddy watching the game, poking him in the ribs when something exciting happened. I never took myself too seriously. An announcer is only as good as yesterday's performance."

Gowdy spent 15 years as the Boston Red Sox's main play-by-play announcer from 1951-65. He left the Red Sox for a 10-year stint as the baseball broadcaster on NBC's "Game of the Week" through 1975.

"He's certainly the greatest play-by-play person up to this point that NBC sports has ever had," NBC Universal Sports chairman Dick Ebersol said from the Torino Olympics. "He literally carried the sports division at NBC for so many years on his back. ... He was a remarkable talent, and he was an even more remarkable human being."

An avid outdoorsman, the native of Green River, Wyo., was also host of the "American Sportsman" series on ABC from the early 1960s into the 1980s.

George Bodenheimer, president of ESPN and ABC Sports, said Gowdy's contributions were "indelible." He said Gowdy was a "pioneer in our business and set the highest of standards for everyone in sports broadcasting."

In 1949, he joined Mel Allen to broadcast games of the New York Yankees and, two years later, he became the No. 1 broadcaster for the Red Sox.

"His distinct voice was a comfort to a generation of baseball fans in New England and throughout the country," commissioner Bud Selig said.

"To fans in New England in the 1950s and '60s, his was the voice that told the stories of the Red Sox to a generation of fans," said Charles Steinberg, the Red Sox's executive vice president for public affairs. "He was the voice under the pillow."

While youngsters curled up beneath their sheets with a transistor radio under their pillows, the players Gowdy told them about developed an admiration for him.

Johnny Pesky, a former Red Sox infielder and now an 86-year-old spring training instructor for the team, spent his last seasons with the team from 1949-52 with Gowdy broadcasting his games.

"He was in the clubhouse before the game. He was really easy to speak to," Pesky said at the Red Sox spring training complex. "He dressed well. He was a peach of a guy."

Gowdy became friends and fished with Williams and made the memorable call on the slugger's home run in his final major-league at bat on Sept. 28, 1960:

"Everybody quiet now here at Fenway Park after they gave him a standing ovation of two minutes knowing that this is probably his last time at bat," Gowdy said. "One out, nobody on, last of the eighth inning. Jack Fisher into his windup, here's the pitch. Williams swings and there's a long drive to deep right! The ball is going and it is gone! A home run for Ted Williams in his last time at bat in the major leagues!"

There were also descriptions remembered for less pleasant reasons.

On Nov. 17, 1968, Gowdy broadcast the Raiders' 43-32 win over the Jets in which Oakland won with two touchdowns in the last minute. He described those plays, not knowing viewers didn't see them because NBC had cut away to fulfill a contractual obligation to show "Heidi," the classic children's story.

He called the last of his 10 consecutive World Series in 1975 between Cincinnati and Boston before being replaced by Joe Garagiola. During Game 3, he and broadcast partner Tony Kubek said umpire Larry Barnett should have called Reds pinch-hitter Ed Armbrister out for interfering with catcher Carlton Fisk, a 10th-inning bunt that led to Cincinnati's victory.

NBC said its decision to replace Gowdy didn't result from Barnett's statement that Gowdy and Kubek were responsible for death threats against him and his family.

If Gowdy called a game, Enberg said, "you knew it was a major event."

Gowdy broadcast part of a Red Sox game at Fenway Park in 2003 as part of an ESPN promotion and was honored there last Aug. 28 before a game.

A funeral is scheduled for Saturday at Trinity Church in Boston, with a private burial to follow.