SCOTTSDALE, Ariz. -- Paula Abdul probably could hit a
fastball about as well as Barry Bonds could impersonate Paula
Abdul.
Bonds entertained and delighted a small gathering of fans and
teammates Tuesday by dressing up as Abdul to judge the San
Francisco Giants spin-off of the hit Fox show ''American Idol,''
called Giants Idol.
Bonds, who wore a strapless dress and a blonde wig, surprised
everyone watching the mock contest, where young players had to sing
in front of the judges.
''I'll never tell my wife to hurry up any more,'' Bonds said.
''Because it took me forever to get ready. I'll never do that
again. I couldn't get my hair right. There were a lot things I went
through during the 30 minutes I was getting ready.''
The event raised $337 from fans that will be matched by the
Giants organization and donated to the Giants Community Fund.
Giants Idol was the brainchild of Mark Sweeney, who decided to
bring a little levity to the clubhouse.
Sweeney, who signed as a free-agent with the team during the
winter, decided the ''Idol'' competition would promote team
chemistry and raise some money. 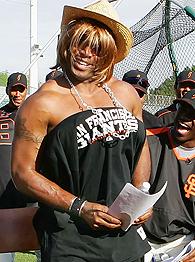 ''It was up in the air whether Barry would do this,'' Sweeney
said. ''We asked him this morning. It was almost embarrassing to
have him do it.''
Sweeney's idea was to bring together the team and help spark
team unity after last year's disappointing season when the Giants
finished under .500 for the first time since 1996.
''It was pretty cool,'' said Omar Vizquel, who acted as host
Ryan Seacrest. ''I just thought he was going to be a judge. As long
as you have fun you connect with each other.
Rounding out the judging impersonators were second baseman Ray
Durham as Randy Jackson and Jeff Fassero as Simon Cowell. Comedian
Rob Schneider, who was visiting the Giants, also participated in
the mock contest.
The second round of the contest will take place on Wednesday
before the team plays an intrasquad game.
Bonds is unsure whether he will again dress up as Abdul.