Kirby Puckett was in critical condition Monday after surgery for a stroke, and friends and family rushed to the Hall of Famer's side in Arizona as former Minnesota Twins teammates anxiously awaited updates. 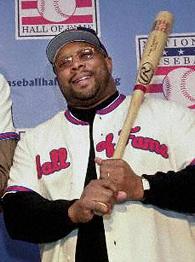 The 44-year-old Puckett, who led the Twins to two World Series titles before his career was cut short by glaucoma, was stricken Sunday morning at his Arizona home.

Puckett had surgery to drain blood and relieve pressure resulting from bleeding in the brain, two sources familiar with the situation told The Star Tribune of Minneapolis.

The club was in Bradenton for an exhibition game against Pittsburgh, but manager Ron Gardenhire stayed behind with star center fielder Torii Hunter, who took himself out of the lineup before Sunday's game against Boston after hearing the news.

As players and coaches worked out in Fort Myers, the mood was somber.

"Our mind isn't on the ballfield. It's on Kirby," said former outfielder Tony Oliva, who like Kelly is a special instructor during spring training.

Puckett was once a guest coach, too, after he retired in 1996, but he hasn't worked for the team since 2002. He has kept a low profile since being cleared of assault charges in 2003, when he was accused of groping a woman at a suburban Twin Cities restaurant.

Puckett has remained close with several people in the Twins organization, and he was one of baseball's most popular players throughout his 12-year career.

"I don't know where I would have ended up if it weren't for Kirby Puckett," Kelly said. "He was not just a great ballplayer. He was a great friend. Everybody is taking it hard."

Oakland third base coach Ron Washington, a former teammate, spent Sunday at the hospital with Puckett, his fiancee, his agent and others. Washington said he saw Puckett, who has two children, go into the operating room. Puckett is engaged to be married this summer.

"I've known him since 1984. We talk every so often. We're close. He's a strong guy, a fighter and I want to think the best," Washington said. "We all know the bad part, but I don't believe in the bad."

After his career ended, Puckett put on a considerable amount of weight -- which concerned those close to him.

"We would tell him. But he enjoyed life. He enjoyed the size he was. That's who he was," former Twins and current Cubs outfielder Jacque Jones said Sunday at the team's spring training site in Mesa, Ariz.

"You can't do anything about it until he decides to change. Hopefully, he'll pull through this, and it'll be like a call for him to change some things in his life," Jones said.

Puckett, who broke in with Minnesota in 1984, had a career average of .318 and carried the Twins to championships in 1987 and 1991. Glaucoma forced the six-time Gold Glove center fielder and 10-time All-Star to retire when he went blind in his right eye.

Perhaps the most popular athlete ever to play in Minnesota, Puckett was the talk of the town around the Twin Cities area.

"The whole thing has taken me by shock," said Joel Davis, the manager of a Twins memorabilia shop in Roseville.

Davis said he fielded questions from concerned fans about Puckett's condition throughout the day.

Sue Chad, a customer at the store, said she and her husband named their dog Kirby.

"We saw him as someone the other players could get behind -- just holding up the energy of the team," said Chad, who fondly recalled Puckett's 11th-inning homer to win Game 6 of the 1991 World Series against Atlanta in a frenzied Metrodome.