MINNEAPOLIS -- Kirby Puckett didn't need much time to make a big impact. Those who felt it, near and far, can only wish he had stayed around longer. 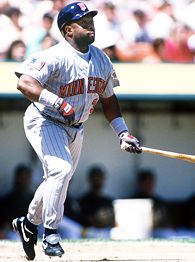 The bubbly Hall of Famer with the boyish enthusiasm for baseball, who led the Minnesota Twins to two World Series titles before his career was cut short by glaucoma, died Monday after a stroke. He was 45.

"He was revered throughout the country and will be remembered wherever the game is played," commissioner Bud Selig said. "Kirby was taken from us much too soon -- and too quickly."

Indeed, Puckett was the second-youngest person to die having already been enshrined in Cooperstown, Hall of Fame spokesman Jeff Idelson said. Only Lou Gehrig, at 37, was younger.

Stricken early Sunday at his Arizona home, Puckett died at St. Joseph's Hospital and Medical Center in Phoenix, where friends and family had gathered. Puckett, who was divorced, is survived by his children, Catherine and Kirby Jr. He was engaged to be married to his fiancée, Jodi Olson, this summer. Funeral arrangements were pending.

Puckett's post-retirement weight gain over the past decade had concerned friends and family, who were saddened but not shocked by his stroke.

"It's a tough thing to see a guy go through something like that and come to this extent," former teammate Kent Hrbek said.

Puckett led the Twins to championships in 1987 and 1991 after breaking into the majors in 1984. With a career batting average of .318, six Gold Gloves and 10 All-Star game appearances, Puckett woke up one morning during spring training in 1996 with blindness in his right eye, a condition that forced him to retire.

"That's what really hurt him bad, when he was forced out of the game," Hrbek said. "I don't know if he ever recovered from it."

A makeshift memorial began to form Monday night outside the Metrodome, with a handful of bouquets, caps and candles laid on the sidewalk.

"I grew up in center field yelling down on him. It's just not right," said fan Daniel Boche, who knelt down to pay his respects. "He was my idol growing up."

"It's tough to take," Twins general manager Terry Ryan said from the team's spring training camp in Fort Myers, Fla. "He had some faults, we knew that, but when all was said and done he would treat you as well as he would anyone else. No matter who you were.

"When you're around him, he makes you feel pretty good about yourself. He can make you laugh. He can do a lot of things that can light up a room. He's a beauty," Ryan said.

Though he steadfastly refused to speak pessimistically about the premature end to his career, Puckett's personal life began to deteriorate after that.

Shortly after his induction to Cooperstown, his then-wife, Tonya, accused him of threatening to kill her during an argument -- he denied it -- and described to police a history of violence and infidelity. In 2003, he was cleared of all charges from an alleged sexual assault of a woman at a suburban Twin Cities restaurant and kept a low profile after the trial, eventually moving to Arizona.

He stopped attending spring training as a special instructor in 2002.

Puckett was elected to the Hall of Fame in his first year of eligibility in 2001, and his plaque praised his "ever-present smile and infectious exuberance."

He spent his entire career with Minnesota.

"I wore one uniform in my career, and I'm proud to say that," Puckett once said. "As a kid growing up in Chicago, people thought I'd never do anything. I've always tried to play the game the right way. I thought I did pretty good with the talent that I have."

Puckett's signature performance came in Game 6 of the 1991 World Series against Atlanta. After telling anyone who would listen before the game that he would lead the Twins to victory that night at the Metrodome, he made a leaping catch against the fence and then hit a game-ending homer in the 11th inning to force a seventh game.

The next night, Minnesota's Jack Morris went all 10 innings to outlast John Smoltz and pitch the Twins to a 1-0 win for their second championship in five years.

"If we had to lose and if one person basically was the reason -- you never want to lose -- but you didn't mind it being Kirby Puckett. When he made the catch and when he hit the home run you could tell the whole thing had turned," Smoltz said.

"His name just seemed to be synonymous with being a superstar," the Braves pitcher added. "It's not supposed to happen like this."

"There was no player I enjoyed playing against more than Kirby. He brought such joy to the game. He elevated the play of everyone around him," Fisk said in a statement to the Hall.

Puckett's birthdate was frequently listed as March 14, 1961, but recent research by the Hall of Fame indicated he was born a year earlier.

The youngest of nine children born into poverty in a Chicago housing project, Puckett was drafted by the Twins in 1982 and became a regular just two years later. He got four hits in his first major league start and finished with 2,304 in only 12 seasons.

Though his power numbers, 207 home runs and 1,085 RBI, weren't exceptional, Puckett won an AL batting title in 1989 and was considered one of the best all-around players of his era. His esteem and enthusiasm for the game factored into his Hall of Fame election as much as his statistics and championship rings.

He made his mark on baseball's biggest stage, leading heavy underdog Minnesota to a seven-game victory over St. Louis in 1987 and then doing the same against Atlanta in one of the most thrilling Series in history.

"There are a lot of great players in this game, but only one Kirby," pitcher Rick Aguilera said when Puckett announced his retirement. "It was his character that meant more to his teammates. He brought a great feeling to the clubhouse, the plane, everywhere."

Puckett's best year was 1988, when he batted .356 with 24 home runs, 42 doubles and 121 RBI. A contact hitter and stolen base threat in the minors who hit a total of four homers in his first two major league seasons, Puckett developed a power stroke in 1986 and went deep a career-best 31 times.

He became a fixture in the third spot in Minnesota's lineup, a free-swinging outfielder with a strong arm and a flair for nifty catches despite his 220-pound frame that made him look more like a fullback. The man known simply as "Puck" was immensely popular.

Fans loved his style, especially the high leg kick he used as he prepared to swing. Public address announcer Bob Casey, who became a close friend, introduced him with vigor before every at-bat, "KIR-beeeeeeeeee PUCK-it."

Hit by a pitch that broke his jaw on his last at-bat of the 1995 season, Puckett woke up one morning the following spring and couldn't see out of his right eye. It was eventually diagnosed as glaucoma, forcing him to call it quits that July.

Ryan said he had an "empty" feeling that day, much like the mood around the organization Monday.