Barry Bonds used a vast array of performance-enhancing drugs, including steroids and human growth hormone, for at least five seasons beginning in 1998, according to a book written by two San Francisco Chronicle reporters.

Beginning in 1998 with injections in his buttocks of Winstrol, the same steroid used in the 1988 Olympics by Ben Johnson and last year by Rafael Palmeiro, Bonds' massive doping regimen grew more sophisticated as the years went on, according to "Game of Shadows," a book to be released later this month written by reporters Mark Fainaru-Wada and Lance Williams.

Fainaru-Wada and Williams write that "more than a dozen people either had been told directly that he was using banned drugs, had seen him using the drugs with their own eyes, or had been provided with information that made the conclusion he was doping inescapable," according to a book excerpt in this week's Sports Illustrated.

The book, written in narrative style, is said to be based on more than a thousand pages of documents and interviews with more than 200 people.

Bonds, who testified before a San Francisco federal grand jury looking into steroid use by top athletes, has repeatedly denied using performance-enhancing drugs.

Bonds said Tuesday at Giants camp in Arizona that he was not aware of the book. When asked if he would read it, he said, "I won't even look at it. There's no reason to."

"I've read what was reported," Bonds' agent, Jeff Borris, told The Associated Press. "Barry is looking forward to playing this year and the improved health of his knee and being as productive as he's ever been."

Bonds was not
in camp Wednesday after returning to California for a custody
hearing, but was expected back later in the day in time to work out
Thursday. The team said the hearing had been scheduled for more
than a month.

Michael Rains, Bonds' lawyer, released a statement Wednesday that questioned the credibility of the book's sources and strongly defended his client.

"The San Francisco Chronicle, after announcing that it had (illegally) obtained Barry's grand jury testimony, previously published questions asked of him while under oath, and his answers," Rains said. "Many of the assertions raised in this article were also previously mentioned. To that extent, this is simply a duplication of previously reported information."

"No, no, no, I don't want to talk about Bonds. I'll see you later," San Francisco manager Felipe Alou said after the Giants' 12-3 win over San Diego in Peoria before bolting onto the bus.

"The Giants have a long-standing policy not to comment on this legal matter," said Staci Slaughter, the team's vice president of communications.

Baseball did not ban performance-enhancing drugs until after the 2002 season, though there has long been suspicion that some star players such as Bonds were taking steroids to gain an edge. This book is yet another distraction for Bonds, who has become as accustomed to steroids questions in recent years as he has inquiries related to his powerful left-handed swing.

Among the items detailed in the excerpt:

• Bonds was motivated to take performance-enhancing drugs by the Mark McGwire-Sammy Sosa chase of the single-season home run record in 1998 and he had never taken any before 1998.

• Through research, Bonds developed a deep knowledge of performance enhancers. He even talked, through third parties, to medical authorities who advised him not to use steroids.

• He began with Winstrol after the 1998 season. He also worked out extensively, sometimes spending 12 hours a day at the gym where he met the Weight Guru, who turned out to be Greg Anderson.

• He also took Deca-Durabolin. By 2001, the authors allege, he was using two designer steroids referred to as the Cream and the Clear, as well as insulin, human growth hormone, testosterone decanoate (a fast-acting steroid known as Mexican beans) and trenbolone, a steroid created to improve the muscle quality of cattle. That's the same year Bonds broke McGwire's single-season home run record (70) by belting 73. 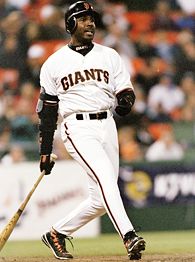 • He got the substances from Anderson, his personal trainer who became a Giants employee. Anderson got them from BALCO labs, headed by Victor Conte. Anderson's employment by the Giants irked the team's training staff, according to the excerpt. The Giants also did a background check, discovering that "World Gym was known as a place to score steroids and that Anderson himself was rumored to be a dealer. But the club decided it didn't want to alienate Bonds on this issue, either. The trainers stayed."

• Despite seeing a big change in Bonds' physical appearance, Giants officials did not challenge their star for fear of upsetting him. "The Giants, from owner Peter Magowan to manager Dusty Baker, had no interest in learning whether Bonds was using steroids, either," the excerpt contends. "Although it was illegal to use the drugs without a prescription, baseball had never banned steroids. Besides, by pursuing the issue, the Giants ran the risk of poisoning their relationship with their touchy superstar -- or, worse, of precipitating a drug scandal the year before the opening of their new ballpark, where Bonds was supposed to be the main gate attraction."

• Anderson kept meticulous records on Bonds' program, many of them on a computer. At times, Bonds gulped as many as 20 pills at a time. He also learned to inject himself.

• Bonds had a relationship with Kimberly Bell, a woman he met in the Candlestick Park parking lot in 1994 while he was married. Bonds even put a down payment on a house for Bell in Arizona from monies he made from card-show appearances (and didn't report as income). She claims he later threatened to kill her.

• According to the excerpt, Anderson told an acquaintance who was wearing a wire in 2003 that: "The whole thing is, everything I've been doing, it's all undetectable. The stuff I have, we created it. You can't buy it anywhere else; you can't get it anywhere else. You can take [it] the day of [a drug test], pee, and it comes up clear.

• Bonds had immunity in grand jury testimony from everything but perjury. He claimed in testimony that he didn't know what Anderson was giving him. "At the end of [the] 2002, 2003 season, when I was going through [a bad period], my dad died of cancer ... I was fatigued, just needed recovery you know, and this guy says, 'Try this cream, try this cream,'" he said. "And Greg came to the ballpark and said, you know, 'This will help you recover.' And he rubbed some cream on my arm ... gave me some flaxseed oil, man. It's like, 'Whatever, dude.'"

The book is scheduled to be published on March 27.

Information from The Associated Press is included in this report