Mike Moorby hates the Yankees. And except for the fact that they haven't won the World Series for five straight seasons (Moorby loves that about them), the Yankees keep giving him reasons to hate them.

Now, they're messing with a little bit of his livelihood.

Moorby, a 38-year-old financial advisor from New Jersey, proudly admits that he feels as good when he sees the Yankees lose as he did when he saw the Red Sox win it all in 2004. In fact, he hates the Yankees so much that he started a side business, creating memorabilia for other pinstripe haters. Inspired by the pain of Aaron Boone's home run that prevented his Red Sox, yet again, from reaching the World Series in 2003, Moorby drew up a logo that features the interlocking letters "YH" (Yankee Hater) with devil horns.

The fledgling enterprise (Moorby's Yankee Hater company is called Rebel Forces LLC) sent a bunch of hats with the YH logo to then-Red Sox first baseman Kevin Millar early in 2004; and in April of that year, a Boston Herald photographer shot a picture of the team's new ace, Curt Schilling, wearing one of them at a Boston Bruins' game. It was an immediate credibility boost.

Without a single piece of advertising, Moorby soon was selling hats from his YankeesHater.com Web site to people in all 50 states, and a handful of orders were coming from Europe and Asia. By now, business isn't quite as brisk, but Moorby says he gets at least one order a day. 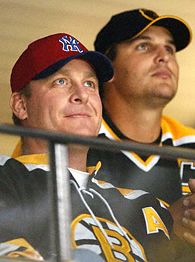 Not surprisingly, the baseball establishment in New York didn't take kindly to Moorby's Yankee Hater merchandise. He says staying in business has meant tearing up a cease-and-desist letter from Major League Baseball; and he claims he has spent all his profits, appropriately, fighting the Yankees themselves, who opposed his trademark application that used the stylized Yankees "Y" in it. If things stay on schedule, final proceedings concerning the merit of Moorby's trademark will go before the Trademark Trial and Appeal Board before the end of the year.

"I'm not going to go out with a whimper," says a defiant Moorby. "Plus, how many times in life do you actually get to play against a team that you hate so much? Who would imagine that [he] would ever go face-to-face with the beast? Well, I am doing that right now."

Officials with Major League Baseball and the New York Yankees declined to comment on the case. But in their filings, attorneys for the team wrote that Moorby's sale of items involving the word "Yankees" and the team's trademarks should not be allowed because the team didn't grant the entrepreneur permission to use them.

Two legal experts contacted by ESPN.com, however, say that it's possible Moorby can defeat the almighty Yankees. Winning a trademark case, they say, requires proving either that a certain brand has been compromised or that there is confusion about who is selling the product.

"The Yankees aren't hurt by this," says Marty Schwimmer of Schwimmer Mitchell, a trademark law firm in New York. "Add to that the fact that sports owners have accepted the degradation of their names and logos as part of 'good-natured' tarnishment. It's all part of the game."

As evidence, Schwimmer cites colleges that routinely make licensing royalties by allowing their mascot to be demeaned by an opposing school's mascot on merchandise, as, for example, the University of Alabama does when it contracts with a merchandising company in Auburn, Ala., that prints T-shirts featuring 'Aubie' spanking little Alabama elephants.

"This is the classic case of corporate paranoia," says Michael McCann, an assistant professor at the Mississippi College of Law. "If they try to make the case that consumers are confused as to what is being sold here, that's absurd. You don't even have to be a baseball fan to recognize the difference between a Yankee Hater logo and a Yankees logo."

Sensing that the Yankees might one day argue that point, Moorby says he mimicked a reporter's experiment of trying to give away Yankees hats at Fenway Park. While the reporter was, for the most part, unsuccessful, Moorby says he easily gave out his Yankee Hater hats.

Moorby also was pleasantly surprised to see David Ortiz wearing a Yankee Hater hat in an interview on the Red Sox Championship DVD, which was sold by Major League Baseball.

"In that video, they marketed my product to more fans than I could have ever imagined reaching," Moorby says.

Moorby says he's willing to continue to fight because he believes his business can be a greater success with the trademark. And although it's a hassle at times, he values the experience of taking on the Yankees at more than a million bucks.

Says Moorby: "I don't think they knew who they were dealing with."