CINCINNATI -- Perhaps it was the pitching practice he got over the weekend or inspiration from the new baseball bat that outfielder Ken Griffey Jr. gave him. President Bush had lots of oomph in his arm to throw out a strong first pitch for the Cincinnati Reds' home opener. 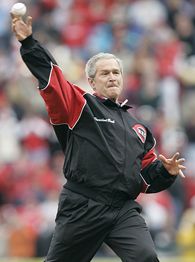 Bush became the first sitting president to throw a ceremonial pitch in Cincinnati as the Reds took on the Chicago Cubs. The ball to catcher Jason LaRue was high and off the plate, but Bush called it "my best pitch, which was kind of a slow ball."

"Give me some tips," the president asked Reds pitcher David Weathers during a pregame visit to the clubhouse.

Bush received a loud standing ovation when he took the mound in this Republican-leaning city. He was accompanied by two injured soldiers and a father who lost his son in Afghanistan.

Little American flags were distributed to the crowd of 42,000 before the game. Fans waved them excitedly as Bush was introduced and drowned out the protesters, like the family sitting a few rows behind home plate wearing matching red-and-white T-shirts that said "11-04-08" -- the date of the next presidential election.

Bush, the former Texas Rangers owner, told Fox Sports Network in a gametime interview that he has been a baseball fan since birth.

"I was born when my dad was in college, and he was the first baseman for the Yale Bulldogs, and mother used to take me to the games," Bush said. "So it was like immersion from a young age.

"I've got the dish at home at the White House, and so, when I'm doing my work, I keep a game on. And there's nothing better than Opening Day," the president said.

But he balked when asked if he would return to baseball after leaving the White House.

Bush shook hands with players from both teams before they took the field. In the Reds' clubhouse, Griffey gave him a black bat, and pitcher Ken Mercker showed he was a loyal Bush supporter.

"I wanted to wear another hat but it didn't match," Mercker said, holding up a blue Bush-Cheney hat from his locker that said "Delivered" on the back.

In the Cubs' clubhouse, Bush walked in and announced, "This is the year." He went straight to manager Dusty Baker, grabbed his hand and turned him to the cameras. "Smile," Bush said, shaking Baker's hand with a broad grin. Baker did as instructed, saying, "I'll do what I got to do."