Two days before right-hander Kris Benson was scheduled to make his Orioles debut, his outspoken wife, Anna, withdrew her petition for divorce. 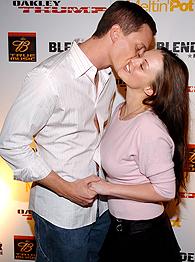 Anna Benson, an actress and model who has posed topless, filed for divorce in Atlanta on March 31. The petition for divorce claimed the marriage was "irretrievably broken."

"Anna did a lot of soul searching over the weekend, and it is her desire to repair her marriage," Bogart told ESPN.com.

The couple has been married for seven years and has two children. Anna Benson had sought full custody, along with child support and alimony.

Impulsive behavior is nothing new for Anna Benson. In an interview with The Associated Press last week, before she filed for divorce, Kris Benson said he still thinks the New York Mets traded him to Baltimore because of his wife.

"New York is just a world of its own. I knew that coming in, but you learn that a little more when you get put in the spotlight like that in a negative and undeserving way," Benson said.

Anna Benson wore a provocative dress at the team Christmas party, and there was talk that she was considering posing nude for Playboy. She's also known for making frank comments about the couple's sex life.

Kris said Anna never had a serious conversation with representatives from Playboy and that her attire at the party was "not as revealing as people say it is."

She did pose provocatively for FHM magazine's April issue.

Information from ESPN.com's Darren Rovell and The Associated Press was used in this report.