NEW YORK -- The Rev. Jesse Jackson says Major League Baseball and San Diego police failed to protect Barry Bonds and should be trying to find out who threw a syringe at him in the Giants' opener.

"For some people, it's about suspicion of drug use because they have no proof. For others, it's a cover for other anger that they have. For example, the closer Hank Aaron got to Babe Ruth's record, the more violence and hate mail he received."
Rev. Jesse Jackson on the treatment of Barry Bonds

The object was thrown near the San Francisco slugger as he came off the field following the eighth inning Monday night in San Diego. Bonds picked up the syringe -- about the size of a fat cigar -- and carried it off the field.

"That fan should have been arrested," Jackson said. "That object could have had a needle in it. It could have hit him. The commissioner of baseball must be outspoken in protecting any players whose lives are in jeopardy, whose security is at risk."

The object did not appear to have a needle, and Bonds called it a syringe.

"It appeared to be of the size of something you would use to baste a turkey and not a syringe per se," Padres chief executive officer Sandy Alderson said.

Richard Andersen, the Padres' official in charge of Petco Park, said he was told by security officials that it was a toy syringe. He also said approximately a dozen other toy syringes were confiscated from fans entering the ballpark on Monday. One fan had several in his pocket and others had syringes taped to their shirts.

"It did not appear to be a medical syringe," Anderson said.

"This knucklehead doesn't represent the fans of this city," he added. "It was just one fan doing something stupid." 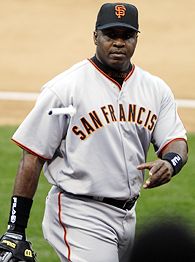 The Padres planned to close off a standing-room-only area just beyond the left-field corner while the Giants are in town because some fans were "acting very inappropriately" on Monday while Bonds was playing left field, Andersen said.

Jackson, a longtime civil rights leader and former presidential candidate, said Bonds has been treated unfairly by those who accept as fact accusations that he used performance-enhancing drugs.

"For some people, it's about suspicion of drug use because they have no proof. For others, it's a cover for other anger that they have," Jackson said. "For example, the closer Hank Aaron got to Babe Ruth's record, the more violence and hate mail he received.

"You cannot let this thing build to the point of irreversible danger," Jackson added.

Alderson said the Padres were attempting to identify who threw the object but he did not think they were likely to do so.

"There is no indication that he was hit," San Diego Police Department spokesman Dave Cohen said, adding that no arrests were made and police are not investigating. The person who allegedly threw the syringe was gone when police arrived, Cohen said.

Jackson disagreed with the decision not to investigate.

"That's unacceptable," he said. "He deserves another level of security."

"We had extra security at the field yesterday, both uniformed police officers as well as private security, on field as well as in the stands," he said. "We've taken some additional precautions for tonight that we think will address some of the issues that arose yesterday."

Bonds entered the season with 708 homers, trailing only Ruth (714) and Aaron (755) on the career list. Following the publication of a book that alleged Bonds used performance-enhancing drugs for a five-year period starting in 1998, baseball commissioner Bud Selig picked former Senate Majority Leader George Mitchell last week to investigate steroids use in the sport.

"I guess none of this is unexpected. I'm saddened by it in the sense that Opening Day was such a good, positive day. ... But controversy will spawn with that type of activity, whether I like it or not."
MLB commissioner Bud Selig on the thrown syringe

"I guess none of this is unexpected," Selig said in Chicago. "I'm saddened by it in the sense that Opening Day was such a good, positive day. Every game was sold out. It was really a great baseball day. But controversy will spawn with that type of activity, whether I like it or not."

Major League Baseball has had a security official with Bonds since spring training. Kevin Hallinan, baseball's senior vice president for security, plans to be at Dodger Stadium this weekend when the Giants play there.

"I can assure you that baseball is protecting all of its players and it's an important priority to us," Hallinan said.