Fifty-nine years after Jackie Robinson broke baseball's color
barrier, his widow was honored at Shea Stadium on Saturday, which
was "Jackie Robinson Day" throughout the major leagues. 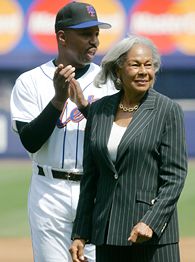 Following a video tribute to the former Brooklyn Dodgers star
that was shown on the scoreboard, Rachel Robinson walked to the
pitcher's mound before the New York Mets hosted the Milwaukee
Brewers. She was accompanied by Bob DuPuy, baseball's chief
operating officer, and Mets manager Willie Randolph.

"I've got a picture of Jackie in my office, so I think about
that every day," Randolph said. "I'm just happy to be a part of
this day."

"He's one of those people you wish you could go have dinner
with," Randolph said.

In Los Angeles, Robinson's daughter, Sharon, participated in a
ceremony to honor her father before the Giants played the Dodgers.

During a ceremony at Shea Stadium on April 15, 1997, baseball
commissioner Bud Selig retired Robinson's No. 42 for all major
league teams. Two years ago, Selig decided "Jackie Robinson Day"
would be an annual event each April 15.

A large blue, gray and white circle with "42" was put over
home plate during Saturday's ceremony, which also was attended by
former Negro Leagues players Robert Scott and Armando Vazquez.

A video tribute was also shown at Dodger Stadium, and Raymond
Pounds, a junior at UCLA and one of 10 local Jackie Robinson
scholars who took part in the ceremony, threw out the first pitch
to Dodgers outfielder Kenny Lofton.

Don Newcombe, Robinson's longtime teammate in Brooklyn and
currently the Dodgers' director of community relations, was also on
hand.

"Jackie was and still is my idol," Newcombe said.

"I heard all the black people buzzing about this man in
Brooklyn named Jackie Robinson," said Wills, who was 14 and living
in Washington, D.C. when Robinson played his first big-league game.
"I asked who he was and they told me. Right then, I said, 'I want
to play for the Dodgers someday.' That was my childhood dream."

Wills signed with the Dodgers in 1951, but played in the minor
leagues until 1959 -- after the team had moved to Los Angeles.

"I still think of him often," Wills said of Robinson. "I play
golf with Don Newcombe a lot, so I always quiz Newk about Jackie.

"When I became a professional, I wanted to be better than
Jackie, so I used him as a model."

Giants star Barry Bonds said he was grateful for what Robinson
went through, but added: "Ask somebody young -- African-American
kids. The story would be asking these younger kids, seeing if they
have any idea."

"He put a big mark in history -- he was the guy who started
getting more people involved in baseball from all different
nations," the 21-year-old first baseman said. "He's one of my
heroes -- the courage he had, the willingness he had to fight
through it. We're all fighting to work through something.

"I heard he played all different sports."

Robinson lettered in baseball, football, basketball and track
and field at UCLA.

The Chicago White Sox remembered Robinson with a special tribute
on the center-field scoreboard at U.S. Cellular Field that showed
clips of his life and career interspersed with some shots of
players from today's game.

Also shown was a note Robinson got threatening his life, and
later his Hall of Fame induction.

Minutes after the video tribute ended, three Jackie Robinson
Foundation scholars were honored and posed for pictures with White
Sox outfielder Jermaine Dye and coaches Harold Baines and Tim
Raines. One of the scholars, Judge Gardner, threw out a ceremonial
first pitch before the White Sox faced the Toronto Blue Jays.

"I think Jackie Robinson made us a lot of money," Chicago
manager Ozzie Guillen said. "He opened doors for a lot of good
things in baseball."

Guillen said Selig "should make all the players go to the Negro
League museum in Kansas City" so they can see the sacrifices that
were made by those players.

The Red Sox also showed a video before their game with the
Seattle Mariners. It included shots of Robinson and Branch Rickey,
Robinson sliding into home plate and Martin Luther King Jr.
speaking.

Also before the game, seven Jackie Robinson scholars were
introduced and stood behind the mound. On the mound, Stanford law
professor William Gould IV threw out a ceremonial first pitch on
one bounce to Jason Varitek. Gould is the great grandson of a slave
who escaped captivity and served in the Civil War.

During the seventh inning stretch, "God Bless America" is to
be sung by Michael Vinson, one of the Robinson scholars.

Prior to their game with the New York Yankees, the Twins honored
three recipients of the Jackie Robinson Scholarship who currently
attend the University of Minnesota.