BOSTON -- The Boston Red Sox and their former first baseman, Doug Mientkiewicz, agreed to end their legal fight over ownership of the ball from the final out of the 2004 World Series by sending it to the Hall of Fame. 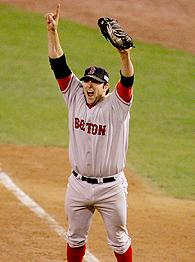 "An amicable agreement was reached many weeks ago, and it
provides a permanent home at the [Hall of Fame], with opportunities
for some public display as well at Fenway Park," Red Sox president
Larry Lucchino said via e-mail Sunday.

The agreement was first reported Saturday night in The New York Times.

Pitcher Keith Foulke fielded the ball off the bat of Edgar Renteria on Oct. 27, 2004, and threw to Mientkiewicz for the final out of Boston's four-game sweep of the St. Louis Cardinals.

It was Boston's first World Series title since 1918.

Mientkiewicz held onto the ball, gave it to his wife, and then
secured it in a safe deposit box and claimed it as his own, joking
that it was his "retirement fund."

The Red Sox said they were the rightful owners of the ball, and even though Mientkiewicz loaned the team the ball for a year, the team went to court last November to get permanent ownership. The suit was dropped a few days later and the sides agreed to arbitration.

Mientkiewicz, a midseason pickup in 2004, was traded the following offseason to the New York Mets. He signed with the Kansas City Royals last year.