Alex Gordon has yet to play a single game in the major leagues and yet his rookie card is the hottest in all of baseball, selling for as much as $2,550 in recent weeks.

Is Gordon the Kansas City Royals' next great player? Could be. But that isn't why his card, which is No. 297 in Topps' 2006 set, is worth that kind of money.

The piece of cardboard is worth that much only because it never should have been produced in the first place.

Last year, in part to reduce confusion in the marketplace, the Major League Baseball Players Association ruled that card manufacturers could make rookie cards only of players who either made the 25-man roster or played in a major league game the season before. Gordon didn't qualify either way. After he led Nebraska into the College World Series, the No. 2 overall pick in the 2005 draft didn't sign his contract -- including a $4 million signing bonus -- until late September. 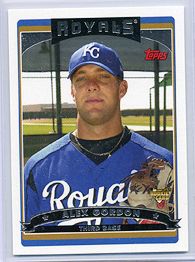 "At the last second, we realized we had made a mistake, so we pulled the cards, destroyed them by cutting out the photo and then destroyed the plates," said Topps spokesman Clay Luraschi.

But a fan named Jeremy Troutman pulled five of Gordon's cards on a shopping trip in his hometown of Wichita, where, coincidentally, Gordon is playing Double-A ball for the Wranglers this season.

Troutman, whose story first appeared in the Wichita Eagle, opened 1,000 packs to find his five cards. He sold all five of them to different collectors for a total of $5,761.79.

Troutman had the right idea. The Gordon cards are believed to exist only in the earliest shipped packs, many of which went to Wal-Marts across the country.

But before you raid your local Wal-Mart in search of a bonanza, you should know that the odds of a payday like Troutman's aren't in your favor. Fewer than 20 of the Gordon cards have shown up for sale on eBay, leading some in the collectibles industry to believe that the card is as rare as they come. Luraschi is confident that fewer than 100 cards got out.

A few weeks ago, Jason Mauk, owner of the card store "In The Zone" in Hagerstown, Md., purchased one of the cards from the wholesaler who provides boxes for his store. After hearing the story, Mauk paid $1,000 for it. He then put it up on eBay and sold it for $1,425.

"I've sold thousands of cards online and I've never had 2,000 hits on one auction like I did in this case," Mauk said. "I've never had 100 people put a single auction on their watch list like I did with this card."

John Schulteis, a 28-year-old from Mission, Kan., bought one of the Gordon cards from Troutman for $895. Schulteis, who buys to sell, currently has the card up for auction.

"The fact of the matter is that Topps is the most collected brand out there, and this card ruins it for people in that they won't be able to have it in their set," Schulteis said.

The last major error of this magnitude in the trading card industry happened in 1989, when a Fleer card featuring Billy Ripken was released that carried an obscenity clearly written on the knob of the bat Ripken was holding. Fleer's attempted cover-up created more than six versions of that card, but the original remained the hottest property, selling for hundreds of dollars at the time. Today, that card can be had for $5.

Some think the price of the Gordon card is worth more than other error cards because of his great potential as a player. In his first full season as a pro, Gordon is batting .326 with 6 home runs and 12 RBI with the Wranglers.

"If he turns out to be a superstar, the price can be sustained for a long time," said Rich Klein, price guide analyst for Beckett, a collectibles publisher. "If he's a flash in the pan, people will still remember it, but they won't care as much."

But Schulteis doesn't agree that Gordon's star potential is much of a factor in the frenzy.

"The fact of the matter is that Topps is the most collected brand out there, and people won't be able to have a complete set without getting this card," Schulteis said. "The scarcity of the card means much more than the caliber of player this guy is or does become."

Like the Ripken card, other versions of the Gordon card have emerged. One version has the photo missing and so just includes the thin card borders, and it has been selling in the $30 to $50 range. A full Gordon card that just has his name on the front and a blank on the back has sold in the $100 to $200 range.

What does Gordon himself think? He was shocked when he first heard about the value of his card.

"One of my buddies said he searched the card online, just as a joke to see how much I was worth," Gordon said. "And he told me, 'Your card is selling for hundreds and hundreds of dollars.' I thought he was joking. It blew my mind."

So far, Gordon hasn't come into possession of any of the valuable cards, but he says he does a double-take every time he signs an autograph to make sure he stays on the lookout for one.

And he certainly isn't complaining about the error.

"Topps is helping to get my name out there," Gordon said. "I should send them a thank you card or something."