CHICAGO -- A.J. Pierzynski barreled over Cubs catcher Michael Barrett, who punched the White Sox catcher and started a bench-clearing melee in the second inning that led to four ejections Saturday. 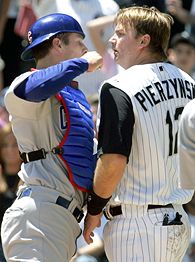 Pierzynski slapped the plate after the collision as the ball got away from Barrett. The Cubs catcher got up, grabbed Pierzynski and punched him. The White Sox's Scott Podsednik, who had been in the
on-deck circle, wrestled Barrett to the ground.

Pierzynski, Barrett, Anderson and Mabry were all ejected after a 15-minute delay.

As Pierzynski went back to the dugout, he raised his hands in
the air while a soldout crowd at U.S. Cellular Field roared. He
slapped hands with his teammates.

Minutes after the game resumed, the White Sox's Tadahito Iguchi hit a grand slam to give his team a 5-0 lead.