Barry Bonds hit his 715th home run Sunday to slip past Babe Ruth
and pull in right behind Aaron, whose long-standing record of 755
may prove even tougher to crack. 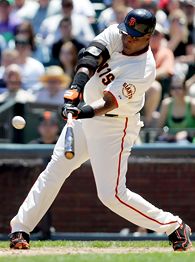 So let the debate begin: Can Bonds hold up to break it?

"If you keep playing long enough anything is possible," he
said.

This one played out exactly the way San Francisco's slugger
wanted -- he hit it at home, in front of the fans who adore him.

It just took him a little longer than he had hoped. The historic
home run came eight days after he tied the Babe for second place on
the career chart.

"For the fans of San Francisco, it can't get any better than
this -- even though I made them wait longer than I have in the
past," Bonds said, wearing a new 715 shirt and cap. "Age ain't
catching up with me."

But at 41, Bonds has been slowed by health problems. He
underwent three operations on his right knee last year that limited
him to 14 games, and also has bone chips in his left elbow.

And many believe his rapid ascent up the home run ranks was
fueled by performance-enhancing drugs -- though he has always denied
knowingly taking steroids.

Bonds' latest milestone -- a mightier homer than No. 714 -- was a
445-foot, two-run shot to center before a sellout crowd. His
seventh homer of the season came on the last day before the Giants
began a road trip to Florida and New York.

Bonds' teammates toasted him with champagne in the clubhouse
after the Giants' 6-3 loss to the Colorado Rockies.

"Everybody was waiting for a moment like this," shortstop Omar Vizquel said. "A couple of words were said."

Bonds homered off Byung-Hyun Kim in the fourth inning. The ball
glanced off a fan's hands about 15 rows up and then dropped onto an
elevated platform beyond the fence.

The souvenir sat there for a few minutes before rolling off the
roof and into the hands of 38-year-old San Francisco resident
Andrew Morbitzer, who was waiting for a beer and peanuts. He was
quickly ushered away by security.

"I got to be a small part of a big day," Morbitzer, a
marketing director and newlywed who brought his bride, Megan.

Bonds circled the bases as shiny orange, gold and black
streamers fell from the upper deck.

Bonds connected at 2:14 p.m. on a 90 mph fastball with the count
full, then immediately raised his arms and clapped his hands before
beginning his trot. Kim became the 421st pitcher to surrender a
homer to Bonds.

"It's a great honor," said Bonds, who watched Aaron hit his
715th home run at age 10. "It's a wonderful honor. Hank Aaron is
the home run king and I won't disrespect that ever. ... I have a
lot of respect for Babe Ruth and what he's done."

Bonds embraced and kissed his 16-year-old son, bat boy Nikolai,
as he crossed home plate, then was greeted by his teammates at the
top of the dugout. He took one curtain call in which he tipped his
hat and raised both arms and blew a kiss to the crowd.

Moments later, he came out again and waved.

After the homer, the Giants unfurled two banners from the light
towers on either side of the main scoreboard in center field: one
of Bonds on the left side and the other of Hammerin' Hank's 755,
and 715 flashed on the scoreboard.

Thousands of fans stayed put in the stadium to watch Bonds' news
conference being played on the center-field scoreboard. Some
chanted "Barry! Barry!" outside the Giants' clubhouse.

"I wish I had the ball," joked Padres catcher Mike Piazza.

Bonds singled to right in his next at-bat with a drive off the
right-field facade that looked as if it might be headed out, too,
for No. 716. He grounded out to third to end the eighth and was
replaced in left field in the ninth by Jason Ellison.

Bonds is still loved at home despite the steroid accusations
that surround his home run pursuit.

This is the first time in nearly 85 years that Ruth hasn't been
in the top two on the career home run list, according to David Vincent of the Society for American Baseball Research. He passed
Sam Thompson to move into second on June 20, 1921, when he hit his
127th home run.

"Watching Barry, I had goosebumps," said Colorado center
fielder Ryan Spilborghs, called up before the game. "It was one of
the most incredible baseball moments I've ever had."

This was Bonds' last chance during the six-game homestand before
the Giants left town for another week. He hadn't homered at home
since May 2 against San Diego's Scott Linebrink.

"Oh, I knew it was gone," said Bonds, who hit his 49th career
homer off Colorado. "I knew it was definitely gone. There was no
doubt."

Kim has a history of giving up notable homers -- he allowed tying
two-run homers with two outs in the bottom of the ninth to the
Yankees' Tino Martinez and Scott Brosius in Games 4 and 5 of the
2001 World Series.

Kim also gave up a key homer in the World Baseball Classic
semifinals in South Korea's loss to Japan.

"I thought the game was finished," he joked. "People cheer
like that when it's over."

Giants manager Felipe Alou wrote Bonds into the lineup without
checking with the seven-time NL MVP about playing in a day game
following a night game, aware that Bonds wanted to make history at
home.

"That's one of the reasons I'm playing him without even asking
him," Alou said. "We're going to be gone for a week. Today's the
perfect day."

Hitting it in Florida in a near-empty stadium was far from what
Bonds or the Giants wanted for his latest feat.

"I'm glad for him. He is a great player, and has had a great
career," St. Louis slugger Albert Pujols said. "It's going to be
tough for anyone else to reach 715."

Fans at San Diego's Petco Park booed when a replay of Bonds'
homer was shown on the big screen during the sixth inning of the
Cardinals-Padres game. Bonds was booed repeatedly during a
season-opening series at San Diego, and a fan threw a toy syringe
at him on Opening Day.

"I'm just wondering how much longer he can do it," Atlanta
pitcher John Smoltz said. "He's the greatest -- in my era -- home
run hitter I have ever seen."

Beginning Monday morning, fans with tickets to Sunday's game
were able to bring their stub to a Giants store for their special
Bonds 715 home run pin.