HOUSTON -- Roger Clemens is coming out of retirement again, agreeing to a $22 million contract to pitch for the Houston Astros
for the rest of 2006.

The 43-year-old Clemens, who will be entering his 23rd major league season, is agreeing first to a minor league deal that pays $322,000 over the five-month minor league season. His first start is likely to be at Lexington, Ky., the Class A team where his oldest son, Koby, plays.

If all goes well, his second start would be June 11 at Double-A Corpus Christi, Texas, followed by a start June 16 at Triple-A Round Rock, Texas. He could be pitching in the big leagues by June 22.

"The ball's in my court now," Clemens said Wednesday at a news
conference to announce his return. "This was a difficult decision
on my part in a number of situations. I have to now take the next
step and get my body ready to come back, get effective, win
games."

Even with an abbreviated season ahead, Clemens is uncertain how he'll hold up physically.

"I can get into a game situation and my body not respond like I
want it to," he said. "I pushed my body hard, but I still need to
get some competitive innings, stressful innings.

"I call them stressful innings because, at my age, it's
stressful."

Clemens first retired after the 2003 season, then changed his
mind and joined his hometown Astros after former Yankees teammate
Andy Pettitte left New York to sign with Houston. The seven-time Cy
Young Award winner said he was "99 percent" retired after 2004,
but he came back for Houston's 2005 run to the World Series.

Then, after the Astros were swept by the Chicago White Sox,
Clemens again said he considered himself retired. But he never
formally said farewell to baseball and always left open the
possibility of returning, even pitching for the United States in
the World Baseball Classic.

When he is added to the major league roster, he gets a one-year
contract worth $22,000,022 -- his uniform number is 22. Because he
won't be playing the full season, he gets a prorated percentage of
that, which would come to about $12.25 million if he rejoins
Houston in late June. The tentative goal is to have him start
against Minnesota on June 22 -- if he's put on the big league roster
on that day, he would earn $12,262,307.

"I'm not riding around in the back of a convertible, waving my
hat and selling tickets," he said. "They expect me to get on the
field and win ballgames and do it the way they're used to seeing me
do it.

"And I accept that more so than anyone."

The Astros were 27-26 and 6½ games behind the NL Central-leading
Cardinals after Tuesday night's 6-3 victory at St. Louis.

Houston was finishing its series with the Cardinals on Wednesday
afternoon, but the video scoreboard at empty Minute Maid Park was
already flashing "The Rocket is Back!!!"

Clemens led the majors with a 1.87 ERA last season and helped
the Astros reach their first World Series. Houston, the New York
Yankees, Boston and Texas all tried to lure him this season.

Clemens said his son was a deciding factor in choosing the
Astros. Koby Clemens has been rehabbing since breaking his left
pinkie on a slide. But he and his father will fly to Lexington on
Thursday, and Koby will be taken off the disabled list by the end
of the weekend. 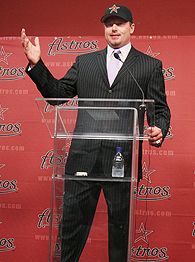 "Yeah, Koby is the wild card in all this," Clemens said.
"Just like he told me this morning, even if he was somewhere else,
we've had too many great moments here the last two years to set
that aside."

Clemens last pitched competitively in the WBC, where he beat
South Africa in the first round and lost to Mexico 2-1 in the
second round on March 16.

In Detroit, New York Yankees manager Joe Torre said Tuesday that
it made sense for Clemens to return to Houston.

"I'm not at all surprised," Torre said. "I didn't think that
him coming back here was ever going to happen. Houston's just such
a perfect fit for him -- he lives there and Andy's on the team.
That's why he came back before, and the circumstances haven't
changed."

The Red Sox issued a statement after Clemens announced his
return to Houston.

"Although we are disappointed that Roger Clemens will not be
joining the Red Sox, we are glad that we went through the process
and reconnected as an organization with Roger," the team said.
"We wish him the best of luck with Houston and in the National
League. When Roger's career does come to an end, we will welcome
him to Fenway Park and will forever consider him to be a legendary
and beloved member of the Boston Red Sox."

Texas owner Tom Hicks was told last week by Clemens' agents that
the Rangers were out of consideration, general manager Jon Daniels
said.

"Tom got the call on Friday that we were no longer in the
running for his services," Daniels said Tuesday. "The way we
looked at it was, it would be an honor to be associated with him
but we've continued to focus on the 25 guys here. It would have
been nice, but we weren't planning on it from the get-go."