CORPUS CHRISTI, Texas -- Chalk up another record for Roger Clemens, who looks as dominant as ever less than two weeks from his scheduled return to the majors. 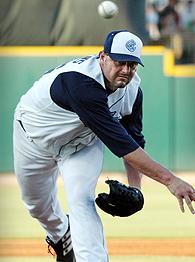 Clemens tied the Hooks' single-game record for strikeouts, set last year by Jason Hirsh. He threw 73 pitches -- 52 strikes -- in his second tuneup for his scheduled June 22 return for the Houston Astros.

"I was able to stay under control, attack the strike zone," Clemens said. "It was great. The dugout was alive -- maybe a little more tonight for obvious reasons."

Mixing breaking balls with fastballs that often topped 90 mph, Clemens fanned nine of the first 12 San Antonio batters he faced and didn't allow a hit until Erick Monzon's line drive to right with one out in the fifth.

When he left after the sixth inning, Clemens waved his gloved hand to the fans and tipped his cap before stepping down into the dugout to chat with Astros minor league pitching coordinator Dewey Robinson.

Clemens said he's not concerned about strikeouts leading to his first Astros start.

"Strikeouts on the major league level are great when I've got one out and a man on third and it's a necessity," Clemens said. "Here, I'm sure the kids -- I'm kind of interrupting their world a little bit. Strikeouts are meaningless right now."

Not that he needed one, but Clemens had an edge over the hitters he faced before the game even started.

The Astros got permission from the Texas League for Clemens to use major league balls in Corpus Christi. The balls have a different coating than minor league balls.

"There is just a small difference. To me, there's a big difference," he said. "Having that ball in my hand and working out there, I was able to maneuver the ball around the strike zone the way I wanted to."

"I felt fatigued, basically, after my warmups, when I went out for my very first inning," Clemens said. "I got what would amount to a second wind and I was on my way."

Bryan LaHair grounded out leading off the fifth before Monzon lined a 1-1 pitch to right, drawing boos from the record crowd of 9,022 at Whataburger Field, a picturesque ballpark adjacent to Corpus Christi Bay.

Wladimir Balentien lined out in the fifth before Clemens struck out Ismael Castro. His 10th strikeout earned free tacos for the fans, a giveaway whenever a Hooks pitcher reaches the mark.

Luis Oliveros singled in the sixth before Oswaldo Navarro grounded into a double play. Clemens struck out Sebastian Boucher to end his start.

Since signing a $22 million contract with the Astros on May 31, Clemens said he's had no recurrence of the back and hamstring problems that plagued him late last season, though he expected to be sore Monday.

"I'm sure I found some new, old muscles again," Clemens said. "I came out of it, body-wise, fairly clean. I'm not there yet, but I'm one step closer."

Clemens made his first minor league start last Tuesday in Lexington, Ky., throwing 62 pitches (40 strikes). He gave up a home run but struck out six in three innings.

He'll pitch again Friday in Round Rock, the Astros' Triple-A affiliate, before making his first major league start against the Minnesota Twins at Minute Maid Park.

The standing-room-only crowd in Corpus Christi was just one of the signs that this was no ordinary minor league game:

• A Houston Astros logo was stamped on the pitcher's mound and
behind home plate.

• A plane circled overhead before the game, towing a message from a local radio station welcoming Clemens.

For all the buzz, Clemens wasn't even the guy in the stadium with the most strikeouts. Nolan Ryan, the only man ahead of Clemens on the all-time list, watched the Rocket from a private suite.

Ryan, with 5,714 career strikeouts, co-owns the Hooks and the Astros' Triple-A affiliate in Round Rock. Clemens is a minority shareholder for both teams.

"He's very good about sharing his thoughts with other players," Ryan said. "Roger likes being in a position to be a mentor to these players. Those are fringe benefits the Astros are getting by having him.

"This type of farewell tour has never been done before, if that's what it is."

"I saw him earlier," Clemens joked, "and I thought he could do it."