David Segui, a 15-year major league baseball player who last was on an MLB roster in 2004, says he's one of the players whose names were redacted in the IRS affidavit that said Jason Grimsley received two kits of human growth hormone on April 19.

In the affidavit, Grimsley told IRS investigators that a player "told him of a doctor in Florida that he was using at a wellness center to obtain human growth hormone ... the player told him, "If you are going to do this, you should do it right."

Segui told ESPN's Jeremy Schaap in an interview Saturday that he is that player, but said he was under a doctor's prescription at the time.

"It was almost word for word the conversation we had, except there's a couple of key words left out," Segui told Schaap. "You know, 'legal' was one of the major -- probably the most major omission in the affidavit ... I was, you know, deemed human growth hormone deficient through blood work ... the doctor put me on human growth hormone, monitored my levels, monitored blood level, blood work periodically, regularly.

"... It was perfectly legal," Segui said. "You know, I was under doctor's prescription."

Segui played for seven teams during his career. Baseball has banned HGH and toughened its testing for other steroids, but there is no reliable test for HGH. 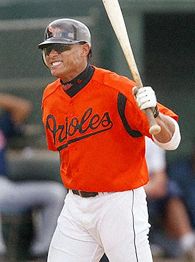 Segui showed ESPN a prescription for HGH from 2003, and said he continues to take HGH today. Segui says that Grimsley told him this past offseason that he planned to take HGH to help his recovery from Tommy John surgery on his elbow. Segui said he suggested that Grimsley see a doctor and have his growth hormone level tested.

"I told him, I was speaking as a friend ... Do it under the doctor's supervision," Segui said. "And my exact words to him were, if you're going to do it, do it the right way."

Segui says that Grimsley did not go to the doctor who prescribed HGH for Segui.

Segui told ESPN he was using HGH while playing as late as 2004, when it was not tested for by baseball. He did not apply for a waiver because of his medical need. As for any player's chance of receiving an exemption for HGH, a baseball spokesman said "that would be difficult to imagine."

A spokesman for Major League Baseball said that HGH was officially banned prior to the 2005 season.

In May, agents searched Grimsley's Arizona home following his admission he had used HGH, steroids and amphetamines.

According to court documents, authorities tracked a package containing two "kits" of HGH -- about a season's worth -- that was delivered to Grimsley's house on April 19. He failed a baseball drug test in 2003, documents showed.

"It was a specific effort to target Bonds," Edward Novak told The Arizona Republic. "We were told that Jason's cooperation was necessary to their case."

Following the revelation that Grimsley's home had been raided, he asked for and was released by the Arizona Diamondbacks. He was later suspended for 50 games by Major League Baseball.