LOS ANGELES -- Only a game into his comeback, Jose Canseco was traded Wednesday after seeking the move because of family obligations. 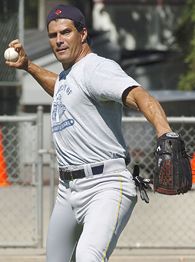 Canseco said in a telephone interview Wednesday that he requested the trade because his 9-year-old daughter Josie will be spending the rest of the summer living with him and he didn't want "to drag her around to hotels."

Long Beach is about 25 miles south of Los Angeles, where Canseco lives.

During Monday's game, Canseco went 0-for-3 with three strikeouts and was hit by a pitch.

"Rough is not the word for it," Canseco said. "I have not played baseball at that caliber in five years.

"This is like throwing myself in the fire," he said. "I felt completely awkward. My timing was off."

Armada manager Darrell Evans said he was not concerned.

"Although he had a rough first game, I'm sure Jose will get his timing down and provide us a strong bat in the middle of the order," Evans said.

"Maybe a year ago the fan reaction would have been very negative. But now it's very positive. Everywhere we go, fans say, 'Jose, you were right. Wow, you've got so much courage.'"
Jose Canseco, on fan reaction after his book, 'Juiced'

"We are excited about Turino and just hope we've got him for a while before a major-league organization calls," said Surf Dawgs president Gary Lochansky.

Canseco's return to professional baseball came some 16 months after he attracted the attention of Congress with an autobiography, "Juiced," that accused several top players of steroid use.

Those accused included fellow Cuban Rafael Palmeiro, who was suspended on Aug. 1 last season for violating baseball's new steroids policy and claimed he didn't know how the drug got in his body.

Canseco, who has acknowledged use of steroids in the past, said Wednesday he doesn't recall how long it's been since he stopped.

"I haven't used any type of illegal drugs. I can't remember how long, to be honest with you," Canseco said.

Canseco, who signed with the Surf Dawgs on June 29, last played professional baseball for the Chicago White Sox in 2001.

His last pitching stint came in 1993 for the Texas Rangers, when he threw one inning and gave up three runs on two hits and three walks.

Canseco's finest years came in the late 1980s and early '90s in Oakland when he and Mark McGwire, known as the Bash Brothers, were one of the top young slugging tandems in baseball.

Before Monday's game for the Surf Dawgs in Chico, the former American League MVP made critical comments about how baseball officials are handling the new, stricter steroids policy and said a "cleanup" in the commissioner's office was needed. He called baseball the "mafia" and suggested the sport wasn't interested in knowing the truth about some star players' use of performance-enhancing drugs.

On Wednesday, Canseco said he and his book had been vindicated and that now the public knows the truth.

He was not concerned about any negative reactions from fans attending his games.

"Maybe a year ago the fan reaction would have been very negative," Canseco said. "But now it's very positive. Everywhere we go, fans say, 'Jose, you were right. Wow, you've got so much courage.'"