MIAMI -- Sammy Sosa is not retired and could hit some more home runs in the major leagues.

At least, that is what he said Wednesday.

"I'm not retired. I'm young and happy," said the Dominican to a radio station in Santo Domingo. 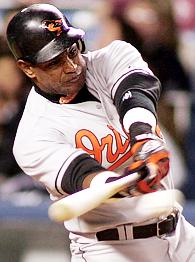 "I wanted a break, but I'm getting ready to come back for the right offer," said Sosa.

Sosa's career was put on hold when he rejected the only offer he received during the winter recess. Even though he did not announce his offical retirement, he did not suggest he was going to continue playing either.

In February, Sosa rejected a non-guaranteed contract with performance bonuses from the Washington Nationals.

Washington originally offered a minor league contract to Sosa and a spring training invitation before offering him a major league deal.

Sosa said he has spent these last months resting with his family, traveling around the world and fixing some personal business. He also took some time off to buy his own plane.

"I have rested physically and mentally. I'm completely recovered after so much time playing ball," he said.

In 1998, he and Mark McGwire captured the world's attention with an epic home run battle.

Even though McGwire won 70-66, both sluggers broke the record of 61 owned by Roger Maris since 1961 and Sosa earned the NL MVP award.

Sosa also hit more than 60 home runs in two other seasons, becoming the only player in history to do it three times.

He recently traveled with the Dominican Republic president, Leonel Fernandez, on an official tour to the United States, Korea, Japan and Taiwan.

During the trip, Sosa told several reporters in Asia that he was seriously planning to play baseball again next year.

"Many people, including kids, asked me why I wasn't playing anymore during the trip. That's why I'm not going to retire yet," said Sosa.

Enrique Rojas is a reporter and columnist for ESPNdeportes.com and ESPN.com.