SAN FRANCISCO -- Shawn Green brings his own soap on every road trip. Mike Cameron never forgets his lavender linen spray and orange-scented spray for the room. Ichiro Suzuki depends on an electric massager that takes up nearly half his suitcase.

And then there's Detroit closer Todd Jones, who wears only one pair of underwear when the Tigers leave town.

"I don't pack any underwear," he said. "I wear it into the park, it gets washed every day and I wear it out of the park. I
guess that's weird. I'm not proud of it, but I'm cutting down on
space."

Players around the big leagues have all kinds of quirks when it comes to how they fill their luggage for the long periods away from home during a 162-game season. Some trips push two weeks and cover
three or four cities, so careful planning is paramount.

San Francisco shortstop Omar Vizquel often begins picking out
clothes from his colorful wardrobe a couple of days before the
Giants leave town, making sure he chooses the right fabrics for the
weather, then matching his shoes and socks and even some funky
belts.

There is about as much metrosexual as there is macho in the
majors.

For Barry Bonds, it's simple.

"Just my bathroom attire, my shaving kit and stuff," the
Giants slugger said. "I don't need anything else."

Many players have learned the hard way by not packing the right
clothes for the climate. For example, they quickly find out that
long sleeves often are necessary when coming to San Francisco in
the summer.

Green, Arizona's right fielder, has brought his own soap and
dish on the road for several years.

"These guys are filthy. I don't want to share soap with them,"
he said. "I don't like germs. I've got germ issues."

From special pillows and tea to the latest best seller, video
games and DVD players, to the basics such as dental floss and
contact lenses -- all of these items make it onto charter planes
when teams hit the road.

"I don't pack my pillow or teddy bear like some players do,"
Vizquel said, standing over his suitcase while getting ready for
the Giants' most recent road trip to Washington and Pittsburgh.

"My closet is organized by colors," he said, staring at
hundreds of hip options, all carefully hanging in their place. "I
pick out the pants first."

He goes with an orange pair he hasn't worn for a while, then
finally comes up with just the shirt to match.

While Vizquel and others are conscious of their wardrobes,
others pack light when it comes to clothing because they like to
shop in different cities during their spare time. Cameron, San
Diego's center fielder, always buys his underwear in San Francisco. 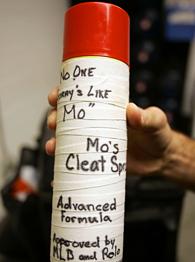 "Golf clubs, every time," Dodgers pitcher Derek Lowe said.
"Other than that, I just kind of wing it. For an eight-day road
trip, I grab the first eight shirts I see. I end up in Arizona with
sweaters. Thank God there's a mall in every city."

For Cameron, it's all about experiencing familiar comforts.

"I want my room to smell like home," he said.

Oakland outfielder Nick Swisher has a sentimental item in his
bag.

He packs an autographed baseball -- a memento from his days with
Triple-A Sacramento -- signed by seven young cancer patients. When
Swisher visited a cancer ward, he asked the children to sign the
ball for him.

"I remind myself that as bad as I think it is, it can't be that
bad," Swisher said. "Sometimes you forget what you have in life
and you need that reality check."

Athletics pitcher Barry Zito, known for his eccentric style,
brings along a foam roller for massaging his hips, as well as
candles and bath salts to help soothe sore muscles the day after a
start. Then, there's his Tempur-Pedic pillow and a photo of him and
his girlfriend in a special frame.

San Francisco's Todd Greene purchased camouflage jock straps for
his teammates during spring training, and says he wears his every
day.

"I bought 20 of them. I like fatigues," Greene said with a
grin. "I also take a fan everywhere I go for the noise. It helps
me sleep. I don't like going to sleep in silence. And I bring a
pillow."

The Giants' medical staff packs a half-dozen trunks full of
everything the team might need -- from weights and wine corks used
for applying eye black, super glue, shoelaces and Velcro to
sunscreen, safety pins, and the cooking spray Moises Alou uses to
clean mud off his cleats between innings.

"We can open our own nail salon," said strength and
conditioning coach Ben Potenziano.

The Giants' Mark Sweeney has seen some strange stuff over the
years. His friend, Robert Fick of the Nationals, brings his own
blanket.

"He refuses to sleep on their blankets," Sweeney said. "I'm
not quirky with that stuff. I'm just quirky on the field."

Suzuki has a special pillow from his native Japan made from
buckwheat, and his self-massage machine. He has been bringing along
his own pillow for 15 years, since his early days as a pro back
home.

"My pillow is very important," he said through an interpreter.
"Depending on the person, the size of the pillow is different for
health reasons. In Japan, they checked my size."

He also relies on a five-knob hand-held massager to rub down the
bottoms of his feet before and after games -- a longtime ritual for
Seattle's star leadoff hitter.

Pittsburgh manager Jim Tracy and Arizona skipper Bob Melvin are
particular about their pens for writing the lineup card, and Melvin
also must have a good supply of hard candies.

"I don't chew, I don't seeds, I don't gum. I have hard candy,"
Melvin said. "I have particular candies that are working at the
time, and the number of pieces of candy that I bring out to the
dugout. ... I eat a piece in the first inning for rally purposes."

But he has accumulated about 20 extra belts over the years,
typically forgetting to pack either a brown or black one depending
on which color he wore out the door.

"You can solve that easy: Just don't wear a belt," Little said
with a grin. "Wear shirts you don't have to tuck in."

Cincinnati's Eddie Guardado always packs pictures of his three
children to hang in his locker.

"I'll forget my glove, my undershirts, my jock, but I will
never forget that," he said.

For A's manager Ken Macha, it's a canister of good coffee he can
make in the hotel -- and his bedtime T-shirt that reads "Life is
good."

Sometimes, clubhouse employees help pack bags on getaway day,
but for the most part it's up to the players.

"There's a misperception," Marlins reliever Matt Herges said.
"Everybody thinks everybody does everything for you. ... But
playing in the major leagues is not reality."

For 20 years, Giants manager Felipe Alou has packed green tea
for the road. Comfortable walking shoes are another must,
considering he spends his time before games searching for the best
bottles of wine he can find.

Some days, the 71-year-old Alou drinks up to five cups of green
tea, which he sweetens with honey or brown sugar.

"Never cream," he said. "I love tea more than wine. Wine you
can only have after the game."

When Alou played for the Giants almost five decades ago, most
players carried a small bag for a one-city trip to Los Angeles --
yet he always brought a bigger one to pick up gifts for family and
friends back home in the Dominican Republic. Once, somebody had a
little fun and gave him a surprise.

"They packed me the L.A. phone book," Alou said. "I knew the
suitcase was kind of heavy. When I opened it, the phone book was
inside. I know it wasn't my roomie, Jose Pagan. He wouldn't do that to me."