SAN FRANCISCO -- The Colorado Rockies left the field in
the ninth inning of Friday night's 5-2 victory over the San
Francisco Giants after fans threw garbage following the ejection of
Barry Bonds. 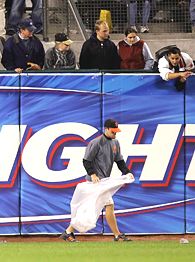 Bonds was batting in the ninth when he began arguing with plate
umpire Ron Kulpa about a called second strike. Kulpa immediately
ejected the Giants' slugger, who got in the umpire's face and began
yelling.

Bonds returned to the dugout, sat down and crossed his arms as
fans responded by throwing garbage, including beer bottles, onto
the field from all directions.

"I don't care about that," Bonds said. "We're trying to win
games, that's all. It happened, it happened. It's over with. Let's
go get ready for tomorrow."

The Rockies left the field and retreated into their dugout to
avoid being hit while fans chanted "Barry! Barry!"

Security came onto the field and so did a large cleanup crew,
causing about 11-minute delay. Fans also threw things at the
umpires as they were escorted off the field after the game.

"Barry didn't like strike two. He thought it was down and I
told him it was not down," Kulpa said. "It was a good pitch and
I'd been calling that pitch all night. We talked about the pitch,
Barry and I. It was getting heated. I warned him, and then he
crossed the line and said something he shouldn't have said. After I
warned him twice, [at] that point he was ejected.

"I gave Barry a lot of rope in that situation. It was a big
part of the ballgame. I gave him every opportunity to stay in the
ballgame, and he crossed the line. When you cross the line, I have
a job to do."

Bonds hit his 723rd career home run in the seventh. He sent a
2-1 pitch from Jeff Francis over the wall in center for his 15th
home run of the year. He is 32 homers from tying home run king Hank
Aaron's record of 755.

The 42-year-old Bonds hadn't homered since July 20 against San
Diego, a span of 26 at-bats.