Were the Florida Marlins close to changing managers on Sunday? 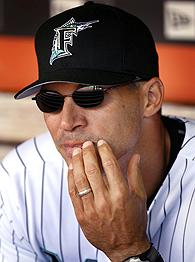 According to media reports in South Florida, a disagreement between Marlins owner Jeffrey Loria and manager Joe Girardi erupted during and after the Marlins' loss to the Los Angeles Dodgers, and at one point team employees started setting up an interview room at Dolphin Stadium for a press conference -- the same room where the team has announced managerial changes in the past.

The news conference was never held and Girardi is still the Marlins' manager.

Girardi has been widely praised for the job he has done with the youthful Marlins, who despite an offseason fire sale and the lowest payroll in the majors are still only 5½ games out of the NL wild-card lead. From May 23 through Thursday the Marlins were 40-26, the best record in the National League during that span.

But the Palm Beach Post, citing unnamed Marlins organization sources, reported that there has been tension since July between Girardi and Loria over strategy and philosophy.

The Marlins lost wild-card race momentum over the weekend when they were swept by the streaking Dodgers. And frustrations apparently came to a head Sunday, during a six-run Dodgers rally in the seventh inning.

Girardi, who was ejected Saturday for arguing balls and strikes, did not leave the dugout to question home plate umpire Larry Vanover when two borderline pitches by Florida reliever Taylor Tankersley were called balls. But according to media reports, Loria, sitting in the stands next to the dugout, yelled at Vanover, prompting Girardi to turn and ask Loria to stop yelling.

Immediately following the game, Loria, Girardi, team president David Samson and GM Larry Beinfest had what two sources told the Palm Beach Post was a heated discussion. That was followed by a 90-minute team meeting, which Girardi described as a "learning session" rather than a scolding or pep talk, and players described his tone as positive.

Loria wouldn't talk about the meeting on Monday.

"It's whatever you guys want to make of it," he said. "Don't blow it up into something it isn't. There's nothing to discuss at all."

Tuesday, Girardi denied there are problems between him and Loria and said he plans to stay with the team "for a long time."

"There is no rift. There never was a rift," Girardi said before Tuesday night's game against the Washington Nationals.

"If you come and see me after we lose a game, you're going to have tension with me. There is tension when I lose. That's who I am. I hate to lose," Girardi said. "But no, there was nothing out of the ordinary."

Loria, who traveled to Washington with the club, hasn't commented about what did or didn't happen Sunday.

"People like to speculate that I am going to Chicago. If I was going to Chicago, I wouldn't have sold my house. ... I don't have a house there. I sold my house. My kids are enrolled in school in South Florida. I love jumping in my pool every day. It's a nice life. ... There are no outs. I signed a three-year deal," he said.