BOSTON -- ESPN baseball analyst Peter Gammons was at Fenway
Park on Saturday, his first visit to a major league stadium since
his brain aneurysm in June. 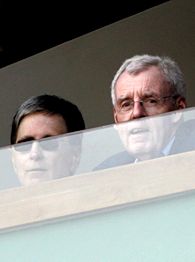 Gammons visited both clubhouses before the game between the
Yankees and Boston Red Sox. The 61-year-old former newspaperman was
speaking with New York manager Joe Torre in the visitors' clubhouse
when hitting coach Don Mattingly came up to say hello.

Gammons and his wife, Gloria, watched the game from owner John
Henry's box. A note welcoming him to the game was posted on the
scoreboard during the sixth inning, drawing an ovation, while a
recording of Gammons singing the Chuck Berry song "Carol" was
played over the loudspeaker.

Gammons was stricken June 27 near his Cape Cod home and was
airlifted to a Boston hospital. He was released from the hospital
July 17.

A Boston native who grew up in nearby Groton, Gammons worked for
The Boston Globe and Sports Illustrated before joining ESPN full
time in 1990. At the Globe in the 1970s, Gammons popularized the
baseball notes columns that have become staples in Sunday
newspapers. He is in the writers' wing of the baseball Hall of
Fame.

In July, he released a CD of original and cover songs, "Never
Slow Down, Never Grow Old," with the proceeds dedicated to a
foundation established by Red Sox general manager Theo Epstein.