BOSTON -- Boston Red Sox general manager Theo Epstein urged
caution on Sunday, insisting "the big picture is pretty darn
good" despite flops in the four straight games against the
Yankees that left New York a season-high 5½ games up in the AL
East.

"We're trying not to overreact to a bad brief period of time,"
he said on the field before the Red Sox lost Game 4 of the five-game series. 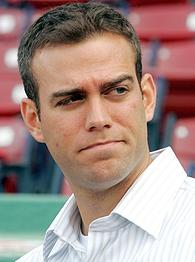 Epstein, who has promised a lower profile since last winter's
bizarre non-resignation saga, came out to calm the panic after the
Yankees won three straight by a combined score of 39-20. After Sunday night's 8-5 loss, that margin stands at 47-25. Boston has
lost 11 of 15 and seen its 3½-game
lead in the division turn into a 5½-game deficit in less than a
month.

"It's proven to be more of a struggle for us. Doesn't mean we
can't win, doesn't mean we're giving up," Epstein said. "Our goal
is to put ourselves in position to win 95-plus games and make the
playoffs every year. And that's always been our goal for this year,
and for next year and the year after that. We still have a chance
to do it."

Since Epstein took over in November 2002, the Red Sox have not
missed the playoffs. But they entered Sunday's game on a pace to
win about 92 games, which would be their lowest total since Jimy
Williams was fired during the 2001 season.

Epstein responded to criticism that he was outmaneuvered by the
Yankees when he failed to make a move at the July 31 trading
deadline while New York picked up Bobby Abreu. Abreu was 7-for-13
in the first three games of the series.

Boston could not afford the more than $27 million Abreu would
have cost them in salary and luxury taxes in this season and next,
Epstein said.

"We have tremendous resources, don't get me wrong. But that's
not something we can do," Epstein said. "We have a plan. We're in
a position competing with less resources where we have to keep one
eye on the future. We can't do certain things."

The bigger budget allows the Yankees to assemble an
"uber-team" -- one in which star players are brought in to replace
those that are injured.

"That's not our dynamic," Epstein said. "We're not going to
have an uber-team every year. We're going to try to build an
organization that can try to sustain success over the long run."

"We're thin right now, we're banged up right now," Epstein
said. "We have a lot of young players who because of injuries and
lack of depth [have] been thrust into positions a little prematurely,
taking on more responsibilities than the way we had drawn it up. A
lot of those guys have responded extremely well, but it's hard to
have them do it month after month."

Boston has four rookies on the pitching staff, including closer
Jonathan Papelbon and starter Jon Lester. Epstein said that even
though all but Papelbon have struggled, they are learning from
their experiences in the majors.

"There's a lot of great development that's gone on this year,
and I think it will bode well for the future," Epstein said. "At
the same time, it's left us a little bit short right now. It
doesn't mean we're not going to win."