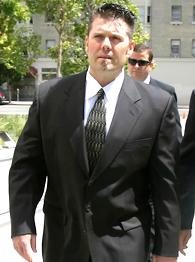 Greg Anderson, found in contempt of court for refusing to
testify, could remain behind bars for more than a year while a
federal grand jury investigates Bonds for perjury and tax evasion.

"Sometimes sitting in the cooler for a long time may have a
therapeutic effect and may change his mind," U.S. District Judge
William Alsup said Monday, suggesting Anderson could remain behind
bars for as long as 16 months -- the remainder of the grand jury's
term.

Alsup recited some of the questions Anderson refused to answer,
including whether he injected Bonds with steroids and "whether
Anderson knows Barry Bonds or Gary Sheffield."

"Sometimes sitting in the cooler for a long time may have a therapeutic effect and may change his mind."
-- U.S. District Judge William Alsup

Prosecutor Matthew Parrella told the judge the government also
was investigating unnamed athletes associated with Anderson and
said there was a "mountain of evidence" to form the basis of the
questions asked of Anderson. He said the evidence included
documents seized at Anderson's house in the BALCO investigation and
from "testimony of other witnesses."

Sheffield, who testified before the Bay Area Laboratory
Co-Operative grand jury in 2003, has admitted using a cream he got
from Anderson but said in a 2004 interview with Sports Illustrated
that he did not knowingly use steroids.

In the book "Game of Shadows," however, two San Francisco
Chronicle reporters wrote that Anderson put Sheffield on injectable
testosterone and human growth hormone in 2002, later selling him
designer steroids known as "the cream" and "the clear."

Sheffield adopted Bonds' heavy training program when he visited
the San Francisco star after the 2001 season and lived at his home
in Hillsborough for two months, according to the book published
earlier this year.

Although Bonds and Sheffield later had a personal falling out,
Sheffield wanted to maintain a relationship with Anderson so he
could keep getting the drugs, the authors wrote.

Rufus Williams, Sheffield's agent, did not immediately return
calls for comment. Sheffield has been on the disabled list since
May when he injured his left wrist.

Anderson previously served three months in prison and three
months of home detention after pleading guilty to steroid
distribution and money laundering in the investigation of BALCO,
which allegedly supplied Bonds and other elite athletes with
performance-enhancing drugs. He has appeared five times before two
federal grand juries without answering pertinent questions.

At issue is whether Bonds lied under oath when he told the grand
jury investigating BALCO in 2003 that he did not knowingly use
steroids and that Anderson gave him what he believed to be flaxseed
oil and arthritic balm.

Anderson has refused to say whether he gave Bonds steroids.
Alsup told Mark Geragos, the trainer's attorney, that jailing
Anderson might test "how loyal your client wants to be."

Alsup rejected Geragos' plea that testifying before the grand
jury would violate a deal Anderson struck last December to plead
guilty in the BALCO case. Geragos, who said he would appeal the
judge's order, said Anderson specifically stated he would not
cooperate with the government as part of the deal.