BOSTON -- An abuse charge against Philadelphia Phillies pitcher Brett Myers was dismissed Thursday after his wife said she did not want her husband prosecuted for hitting her in the face during an argument near Fenway Park. 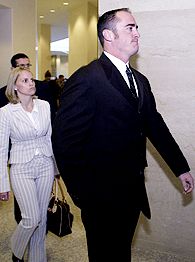 Judge Raymond Dougan acknowledged that Myers struck his wife June 23 but dismissed the charge over the objection of prosecutors because Kim Myers agreed to an affidavit showing she did not want the charge pursued.

"There's no violence in our family. That night in Boston we had both been drinking," Kim Myers told the judge. "I was not hurt. I was not injured."

District Attorney Daniel Conley said the judge "sent a message that abusers can use a statute intended for minor altercations to avoid being held responsible for serious domestic violence charges."

Authorities say the two were arguing when Brett Myers hit his wife. One witness told investigators he pulled her hair.

Police responded to a 911 call and found Myers' wife crying and with a swollen face, prosecutors said. Officers found Myers nearby and arrested him. The 6-foot-4, 240-pound Myers was booked by police, and his wife posted his $200 bail.

"There appears to be no coercion or pressure that resulted in this being filed," Dougan said, referring to the "affidavit of accord and satisfaction." He acknowledged it's hard to identify coercion in domestic violence cases.

Assistant District Attorney Susan Terrey said she did not have specific evidence indicating Kim Myers was pressured into the dismissal agreement.

The judge noted the couple has been in marriage counseling since shortly after the fight. Kim Myers said the counseling has helped the couple, who have two children, and she denied other physical abuse.

"He's a loving father, he's a loving husband. This is not something that happens on a daily basis," she said. "Or ever."

A statement from Kim Myers filed with the court agreement said she and her husband had been arguing about what to do after dinner -- she wanted to go to another bar, he wanted to return to their hotel.

"I became upset with him, and I pushed him away from me. That's when other people saw us disagreeing with each other," the statement said.

The arrest came before the Phillies were to play a three-game series with the Red Sox. Myers was granted a leave through the All-Star break. At the time, Myers said that while he disputed the accusations, his behavior was "inappropriate and for that I apologize."

Myers, an ace of the Phillies staff, went 12-7 this season with a 3.91 ERA. He was treated as a celebrity by court officers, who shook his hand and patted him on the back. One told him, "Good luck, it will be all right," while another said, "Nice seeing you again."