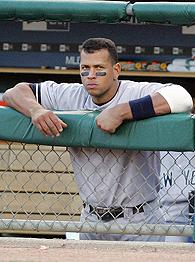 Sources familiar with the situation told ESPN.com that Piniella, who is extremely close to Rodriguez, expects the Cubs to pursue the 10-time All-Star aggressively. The 63-year-old manager and the 31-year-old Rodriguez have what amounts to a quasi-father/son relationship; Rodriguez was managed in Seattle by Piniella from 1994 to 2000. It is that relationship -- and the tantalizing talent of Rodriguez -- that has prompted Piniella to want to explore a trade with the Yankees.

Despite the Yankees' insistence that they have no intention of trading Rodriguez, the former two-time American League MVP seems to have alienated fans and perhaps even teammates with his postseason failures. For the second consecutive year, Rodriguez failed to drive in a run and helped contribute to an early exit by the Yankees, most recently a 3-1 division series loss to the Detroit Tigers. In the final game of that series, Rodriguez was dropped to an unheard-of eighth in the batting order. He finished the series 1-for-14 with no extra-base hits and is 4-for-41 (.098) with no RBI in his last 12 postseason games.

Rodriguez has a no-trade clause and could veto any proposed deal. But the idea of playing for Piniella, in the slightly less-pressurized Chicago market, and for a franchise that loves star power could appeal to Rodriguez. So could a chance for a fresh start after a .290-35-121 regular season that wasn't good enough for Yankees fans.

Agent Scott Boras, who negotiated Rodriguez's 10-year, $252 million contract with Texas in December 2000, downplayed speculation about Rodriguez being traded to the Cubs or any other club.

"He's a great player, and a lot of teams have an interest in a player of that stature," Boras told ESPN.com's Jerry Crasnick. "The reality is, Alex is happy in New York. He likes it there. He doesn't want to go anywhere and he has a no-trade clause. I think it's the end of the story."

"What team is going to go out and trade a huge package of talent for a player they know could possibly leave them?" Boras said. "We designed the contract in a way that puts in the player's hands the ability to control his fate. Alex Rodriguez has that ability."

For the Cubs, whose management experienced the rare and unnerving sight of empty seats at Wrigley Field this past season, the attraction of Rodriguez is obvious. He would immediately strengthen a lineup in dire need of power. He is normally an accomplished defensive player. And despite his postseason difficulties, he has a career .305 batting average and 464 career home runs in 13 major-league seasons.

With the hiring of Piniella, it is understood that the Cubs will expand their payroll, which was close to $100 million in 2006. Depending on how much they want to spend, the Cubs are one of the few teams capable of taking on Rodriguez's salary. He is owed $95 million for the remaining four years of the landmark 10-year, $252 million deal, he signed with Texas. The Yankees are responsible for paying $66.6 million; the Rangers are paying the other $28.4 million.

A Cubs deal with the Yankees potentially could include third baseman Aramis Ramirez (career highs of 38 home runs and 119 RBI in the regular season), but Ramirez can opt out of his contract and become a free agent this offseason. It is thought the Yankees would also want a quality starting pitcher in any deal involving Rodriguez.

Piniella, who replaces Dusty Baker after the latter's four-season tenure in Chicago, agreed to a three-year deal, with a club option for a fourth, Monday. He has hired most of his coaching staff and has decided, sources say, to retain Cubs pitching coach Larry Rothschild.