ST. LOUIS -- Derek Jeter expects Alex Rodriguez to remain with the Yankees next season, saying there was no need to discuss A-Rod's dismal performance during New York's first-round loss to the Detroit Tigers.

Back from his first European vacation, the Yankees' captain wouldn't say whether he lobbied for owner George Steinbrenner to bring manager Joe Torre back for a 12th season. Torre dropped Rodriguez to eighth in the batting order in the fourth and final game against Detroit -- the lowest A-Rod has hit in 10 years.

"I don't have anything to do with that. So I don't see why I would have to meet with him," Jeter said Wednesday. "From what I understand, I haven't heard that there's any air that needs to be cleared between them. I'm not speaking on his behalf or Mr. T's behalf, but it's not anything that I've heard."

Rodriguez hit .071 (1-for-14) against Detroit and is 4-for-41 (.098) without an RBI in his last 12 postseason games dating to 2004. His relationship with some teammates appeared to be strained at times during the season. Jason Giambi was quoted in Sports Illustrated as telling Torre: "It's time to stop coddling him." 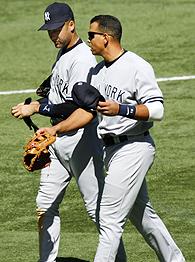 After deducting the money it receives from Texas, New York owes Rodriguez $66.6 million over the final four years of his record $252 million, 10-year contract. Yankees general manager Brian Cashman repeatedly has said he has no intention of trading the two-time AL MVP.

Jeter said he's spoken with Rodriguez -- briefly -- since the Yankees were eliminated.

"You support him. Everyone supports all your teammate at all times," said Jeter, wearing a blue pinstriped suit. "I don't really know if there's anything else I can do."

Jeter doesn't sense any tension in the Yankees' clubhouse, where the constant focus is on winning the World Series -- which New York has not done since 2000.

"Everyone tries to assume what's going on in the clubhouse," he said, "what people think they know and what they think people are doing. They have no idea. But no, I don't see any tension."

Jeter was surprised at how fast Torre's job status became an issue after the team's elimination.

"You don't have to lobby on behalf of Mr. T. Everyone knows what he can do," Jeter said. "If I would ever have any conversations with anyone, I'd keep it between me and who I'm speaking with."

Torre is entering the final season of his contract and says he isn't sure whether he wants to manage beyond 2007. Jeter's first full season was 1996, Torre's first year with the Yankees, and the two are close.

"New York, it doesn't make a difference if you have a contract or not," Jeter said. "There's expectations every season. So I don't think just because it's his last year on his deal that the focus can be any more on him. It's always on us to win."

Even though the Yankees (97-65) matched the crosstown New York Mets for the best regular-season record in baseball this year, Jeter doesn't take much satisfaction from the season. On Tuesday, Mets first baseman Carlos Delgado said he thought the Mets were the NL's best team.

"They don't give a trophy saying: 'Well, you know, you thought you had the best team, so you win,'" Jeter said. "It doesn't make a difference what you think about your team. The bottom line is who performs."

While Jeter heard about the controversy over what was on Kenny Rogers' hand in Game 2 of the World Series, he said there was no discussion of any foreign substance during Rogers' playoff start against the Yankees.

"I don't think that really had anything to do with it," Jeter said. "Bottom line, you can take a pine tar rag and put it behind the mound if you want, you've still got to throw the ball over the plate."

Rogers, who hasn't allowed a run in the postseason, appeared to have a mark -- although lighter -- on his hand during his start against New York.

When told about the pictures, Jeter smiled.

"So you just send Detroit home and we can come play tomorrow,
right?" he joked.