The New York Times best-seller "3 Nights in August," based on
a 2003 series against the Chicago Cubs and delving into La Russa's
managing style, may soon be made into a screenplay. 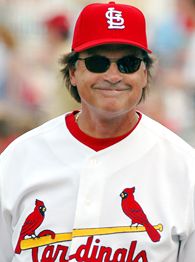 Producers Kevin Pollak and Kevin Frakes, inspired by the book,
were in town during the World Series to witness the culmination of
perhaps La Russa's finest managing job. They spent time with the
manager and kicked around screenplay ideas as the Cardinals put a
late-season swoon behind them and won the franchise's first World
Series in 24 years.

The Cardinals' magical October would make a good book, but La
Russa doesn't mind the realism surrounding his team's ultimate
failure in 2003, though.

"The thing about '03 is there was no Hollywood ending," La
Russa said. "The series ended like Hollywood, but we got beat."

Coincidentally, 2003 is the one season this decade in which the
Cardinals didn't make the postseason.

"This is an insider's view to a world that has never really
been known or told."

Pollak envisions a behind-the-scenes biopic using an actor
portraying Buzz Bissinger, the book's author, as a vehicle that'll
help viewers get to know the manager.