WASHINGTON -- Manny Acta began preparing to be a major-league manager when he was the only kid with a catcher's mitt in
his neighborhood back in the Dominican Republic. 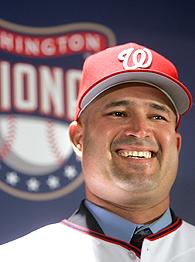 "So I was like, 'I'm running the game, or I'm taking the glove
away,'" Acta recalled Tuesday. "I've run games all my life."

Now he'll run them for real from big-league dugouts after being
hired by the Washington Nationals, who made him the youngest
manager in the majors.

The 37-year-old Acta, the New York Mets' third-base coach the
past two years, replaces 71-year-old Frank Robinson, who was the
oldest manager in baseball and was told during the final week of a
71-91 season that he wouldn't be back.

Robinson was a Hall of Fame player who managed in the majors for
16 seasons. Acta's days as an infielder ended in the minors -- when
he was 20, he said, "they told me to my face I couldn't play" --
and this is his first major-league managing job.

It's a return of sorts: Acta was Robinson's third-base coach
with the Montreal Expos from 2002-04, before the franchise moved to
the nation's capital. So Acta -- who said he learned a lot from
Robinson, particularly about communicating with players -- already
knows some key veterans, including first baseman Nick Johnson,
catcher Brian Schneider, starting pitcher John Patterson and closer
Chad Cordero.

"Frank was more of an old-school guy. We're going to have to
wait and see how it's going to be with Manny," Schneider said.
"He's young. He's motivated. He's waited to do this for a long
time. He knows the game of baseball."

"Usually, with a manager, they're strong in one area or the other. He's really well-balanced, all the way around. He really understands teaching, developing, building a young club."
-- Jim Bowden, Nationals GM

Team president Stan Kasten and general manager Jim Bowden said
Acta impressed them with his personality, his knowledge of the
Nationals and his ideas about how to turn around a club that
finished last in the NL East the past three seasons.

"Usually, with a manager, they're strong in one area or the
other. He's really well-balanced, all the way around," Bowden
said. "He really understands teaching, developing, building a
young club. He has great people skills, but he knows how to put the
hammer down."

The Nationals hope to be competitive when Washington's new
stadium opens in 2008.

"We have a very good plan in place here. We're going to do it
the right way," Acta said. "We're going to be patient, and we're
going to bring a winner here."

Set to lead what's expected to be an inexperienced roster next
season, Acta noted that Washington's most pressing problem is
starting pitching, where Patterson is the only given. Acta said the
defense needs to improve and that he will stress fundamentals.

"Everyone who's been with him has raved about him," Kasten
said. "He came in here probably more prepared than any candidate
we had, knowing our roster, knowing the holes in our roster."

Washington interviewed several people for the job with varying
degrees of experience; Lou Piniella and Joe Girardi both withdrew
from consideration. Bowden acknowledged it was "a very long
process" with "a lot of candidates" and said Acta was part of a
group of five up-and-comers under consideration.

He managed eight seasons in the minors and five in the Dominican
Winter League, and he led the Dominican Republic to the semifinals
at the World Baseball Classic this year.

During that tournament, Acta benched a struggling Alfonso Soriano, the All-Star who hit 46 homers and stole 41 bases for the
Nationals in 2006 and has filed for free agency.

Acta said Soriano was the first player who called to
congratulate him on his new job -- although Acta, Kasten and Bowden
all cautioned they figure the size of a contract will have more to
do with where Soriano winds up than who the manager is.

Still, Kasten and Acta spoke about how having the only Dominican
manager in the majors would help attract Latin players and help
expand marketing to Hispanic fans. At one point, Acta addressed
fans in Spanish saying, "This is the capital of the world, and
this is the world's team. Not America's team -- the world's team."

He played six seasons of minor-league baseball in the Houston Astros' organization before becoming a coach in Class A in 1992.
That began a climb, first through the minors and then the majors.

"How appropriate: An immigrant from the Dominican Republic like
me comes to America, works hard, keeps his nose clean and gets his
chance to manage the capital of the United States' baseball team,"
said Acta, who became a U.S. citizen in 1999. "God bless America.
Only here."

He flashed a broad grin repeatedly: When he stepped to the
podium. When he donned a jersey with the number 14 and his name on
it. When he drew laughs with his quick wit.

Bowden was giddy, too, at one point yelling into the microphone:
"Let's Acta-vate, baby!"

Fortunately for Acta, his new boss was smiling, too.