NEW YORK -- For one glorious summer, Mark McGwire was bigger
than baseball itself. America stopped to watch each time he came to
the plate, and cheered every time he sent a ball into orbit. 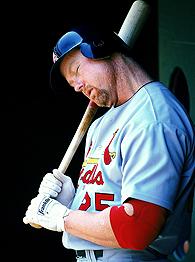 He could do no wrong, it seemed. Surely he would be a shoo-in
for the Hall of Fame someday.

And then came that day on Capitol Hill. Over and over, the big
slugger was asked about possible steroid use, and his reputation
took hit after hit as he refused to answer, saying he wouldn't talk
about his past.

Now, with Hall ballots in the mail, McGwire's path to baseball
immortality may have hit a huge roadblock.

The Associated Press surveyed about 20 percent of eligible
voters, and only one in four who gave an opinion plan to vote for
McGwire this year. That's far short of the 75 percent necessary to
gain induction.

"There is a clause on the ballot indicating that character
should be considered and after his nonperformance at the
congressional hearings his character certainly comes into play,"
said the Dayton Daily News' Hal McCoy.

"He doesn't want to talk about the past?" he said, "Then I
don't want to consider his past."

McGwire, who hit 583 career home runs, headlines the ballot
released Monday along with Cal Ripken Jr. and Tony Gwynn. Results
will be announced in early January.