LOS ANGELES -- Larry Sherry, MVP of the 1959 World Series as
a reliever for the Los Angeles Dodgers, has died after a long
battle with cancer. He was 71.

Sherry died early Sunday at his home in Mission Viejo, according
to his brother, Norm, a former catcher who also played for the
Dodgers. 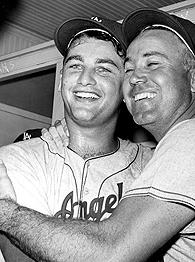 Sherry's two children and several other family members spent
Saturday at his home.

"We were all there that day -- my brother, George; nieces and
nephews, his son and daughter," Norm Sherry said Monday from his
home in San Diego. "He had a caregiver there, and died shortly
after his daughter left."

Sherry was 2-0 with two saves and an 0.71 ERA to lead the
Dodgers past the Chicago White Sox in six games to win the World
Series in their second year in Los Angeles. He was the winning
pitcher in the fourth and sixth games.

"Larry Sherry was a local product who became a household name
in Los Angeles with his World Series heroics in 1959," the Dodgers
said in a statement. "He will always be associated with the
Dodgers' first championship in Los Angeles, and our deepest
sympathies go out to his brother, Norm, and the entire Sherry
family."

Sherry had a 53-44 lifetime record with a 3.67 ERA in 400 relief
appearances and 16 starts. He pitched for the Dodgers from 1958-63,
and later played for the Detroit Tigers, Houston Astros and
California Angels before retiring in 1968 after appearing in three
games with the Angels. He had a career-high 20 saves for the Tigers
in 1966.

Sherry, born July 25, 1935, in Los Angeles, was the youngest of
four brothers. He lived in Mission Viejo for the past 36 years.

"He had a tough childhood," Norm Sherry recalled. "He was
born clubfooted, doctors had to break his legs and reset them. He
wore casts on both legs for the first year of his life. After that,
he had to wear special shoes."

Following retirement, Sherry served as the pitching coach for
the Angels and Pittsburgh Pirates and managed in the White Sox
organization. Norm Sherry said his brother gave pitching lessons
before becoming ill about 12 years ago.

"He was a tough competitor. He was all business when he put
that uniform on," Norm Sherry said. "He had a way about him when
he came in from the bullpen, he was a mean pitcher, he didn't give
any ground to anybody.

"We had Don Drysdale, Stan Williams, Larry, Roger Craig, Ed
Roebuck -- all guys who if they didn't like the way you looked at
them, they'd pitch you inside, good inside."

Norm Sherry, four years older than Larry, said his biggest
thrill in baseball came in 1960, when he hit his first major league
home run -- a game-winner for the Dodgers against Philadelphia in
the bottom of the 11th inning. What helped to make it so special
was that Larry was the winning pitcher.

"We used to play in the alley way, high school, minor league
ball one year," Norm said. "I was very proud to watch him become
such a good pitcher. His World Series performance was really
something. For me being the older brother, I was popping my
buttons."

Norm Sherry played five years in the majors, and later served as
a coach and manager with the Angels and a coach with Montreal, San
Diego and San Francisco.

Sherry's wife, Sally, died three years ago. He is survived by a
son, Scott, a daughter, Susie, five grandchildren and his three
brothers.