MIDDLEBOROUGH, Mass. -- Kathryn Gemme, a lifelong Red Sox fan who followed the team since the days of Babe Ruth, has died. She was 112. 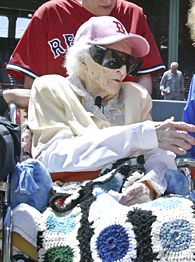 Gemme died at the Nemasket Healthcare Center in Middleborough on Friday, according to the O'Neill Funeral Home.

As an 18-year-old, she attended her first game at Fenway Park in
1912 shortly after the ballpark opened. At 109, Gemme was greeted
by catcher Jason Varitek and former player and coach Johnny Pesky
during her last game in May 2004.

"That was a big day of her life,'' her daughter, Lucille
Findley of Jacksonville, Ill., told The Boston Globe.

Before the days of television, Gemme would listen to Red Sox
games on the radio and take detailed notes that she would later
read back to her husband, Ovella, when he returned home from work.

Gemme credited her long life and health to simple living.

"I didn't drink, didn't smoke, I ate regularly. No fancy
stuff," she once told The Enterprise of Brockton.

Although her eyesight, hearing and mobility failed, she remained
mentally sharp until the end, said Sharon Gosling, Nemasket's
activity director.

Born Kathryn Moreau in Chicopee in 1894, she graduated from
Chicopee High School and attended a local secretarial school.
During World War II she helped prepare parachutes for the Air Force.

Besides her daughter, she is survived by four grandchildren and seven great-grandchildren.