Former Reds pitching coach Vern Ruhle died Saturday night at MD Anderson Hospital in Houston of complications from a donor stem cell transplant for the treatment of multiple myeloma, a cancer of the bone marrow. He was 55. 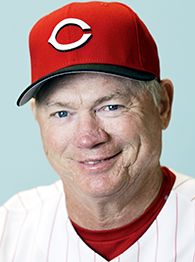 "The baseball and Cincinnati Reds families mourn the loss of an excellent coach, wonderful husband and loving father," the Reds said in a statement Sunday. "In his 35 years in professional and collegiate baseball, Vern touched many people inside and outside the game. We are privileged to have been a part of his life. He will be greatly missed."

Ruhle began 2006 as the Reds' pitching coach, but he was
diagnosed during a routine physical in February and missed the
whole season. He had been assigned to work as the Reds' minor
league pitching rehabilitation coordinator for the upcoming season.

Ruhle pitched in the major leagues for Detroit, Houston, Cleveland and the California Angels from 1974-86, going 67-88 with a 3.73 ERA. He was a pitching coach with Houston, Philadelphia and the Mets before joining the Reds organization in 2004.

Ruhle is survived by his wife, Sue, and two children, daughter Rebecca and son Kenny. Funeral arrangements are pending.