NEW YORK -- Jack Lang, a Hall of Fame baseball writer who for two decades had the pleasant assignment of telling players they'd been elected to Cooperstown, died Thursday. He was 85. 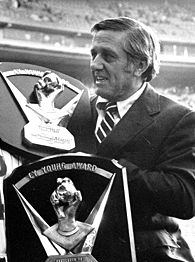 Lang had been ill for an extended period with a variety of ailments. He died at a rehabilitation center in Huntington, said his lawyer, Kevin Brosnahan.

Lang worked in the news business for more than a half-century and honored the reporter's credo into his final days. This month, before entering the hospital and sensing he did not have long to live, he called a colleague to be sure all the biographical information for his obituary was correct.

"He's a man that loved baseball to the core of his soul and he was a good friend and objective, as well," Hall of Fame pitcher Tom Seaver said.

A fixture on the New York scene who covered Jackie Robinson's major-league debut, Lang was honored by the Hall in 1986 with the J.G. Taylor Spink Award "for meritorious contributions to baseball writing." At his speech in Cooperstown in 1987, he poked fun at his talent.

"I'm sure there are an awful lot of English teachers ... in my early years that must be whirling in their graves at the thought that I won an award for writing," he said.

Many elite players knew Lang for another reason.

"As Billy Williams said, 'You're the good-news man,'" Lang said in his speech.

As secretary-treasurer of the Baseball Writers' Association of America from 1966-88, Lang was in charge of counting the Hall of Fame votes and held the job of telling players when they'd been elected. He called 44 in all, from Red Ruffing to Steve Carlton.

Lang often said his rule was simple: "Only call the winners." To phone a candidate who fell short on election day would raise false hopes, he said.

The only exception he made, he said, was for Roy Campanella. The former Brooklyn Dodgers catcher, who was wheelchair-bound, told Lang he'd need extra time to react to the result and asked for a call either way. After several misses, Lang eventually got to tell Campanella he'd made it.

Lang began his baseball career with the Long Island Daily Press in 1946, covering the Dodgers a year before Robinson broke the major-league color barrier.

When the Dodgers left for Los Angeles after the 1957 season, Lang switched to covering the Yankees, and he moved over to the Mets starting with their expansion season in 1962.

The Press closed while Lang was at spring training in 1977. Within four hours, the News hired him to cover the Mets.

Lang retired from the News at the end of 1989 and then wrote a column for SportsTicker until 1997. He was a correspondent for Sporting News for more than 20 years.

"Jack was always a gentlemen with us," Mets owner Fred Wilpon said. "Jack loved the game.

"He's from the era of 16 teams and traveling on trains with the guys. There was a different relationship with the beat writers and the players at that point. A good guy, a good man," he said. "He was in the generation of Red Smith and Dick Young."

Lang was a member of Major League Baseball Scoring Rules Committee and was an official scorer at the World Series.

"He was a true historian of the game. The world of baseball is a lesser place now without him," former Met Rusty Staub said.

After serving as BBWAA's secretary-treasurer, he was given the role of executive secretary from 1989-94, a job created for him. He also arranged BBWAA charters during the World Series, flights that became known as "Air Langus."

Lang was the author of "The Fighting Southpaw" with Whitey Ford, "Baseball Basics for Teenagers" and "The New York Mets: 25 Years of Baseball Magic."

He is survived by three sons and a daughter.

A funeral service was planned for Monday in Northport on Long Island.