BALTIMORE -- Steve Barber, the first 20-game winner in
modern Baltimore Orioles history and the losing pitcher in one of
baseball's wildest no-hitters, has died. He was 67. 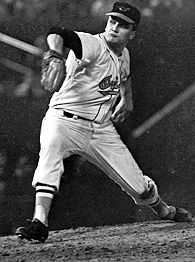 Barber became ill last week and died from complications of
pneumonia Sunday at a hospital in Henderson, Nev., the Orioles said
Monday.

A two-time All-Star and a member of the Orioles' Hall of Fame,
Barber was 121-106 with a 3.36 ERA from 1960-74. The lefty spent
the first half of his career with the Orioles and was traded to the
New York Yankees in July 1967. He later pitched for the Seattle
Pilots, the Chicago Cubs, the Atlanta Braves, the California Angels
and the San Francisco Giants.

Barber's best year was 1963, when he went 20-13 with a 2.75 ERA.
On a franchise that became known for its pitching, Barber was the
first Baltimore player in the modern era to win 20 games.

The Orioles won their first World Series in 1966, sweeping the
Los Angeles Dodgers and allowing a total of two runs in the four
games. Barber was 10-5 that year but did not get to take part in
the Series, having pitched only seven games after the All-Star
break because of tendinitis in his left elbow.

Barber started out the 1967 season in impressive fashion, holding the
Angels hitless before Jim Fregosi doubled with one out in the ninth
inning. Two weeks later, however, Barber pitched his most memorable
game.

Facing Detroit in the first game of a doubleheader at old
Memorial Stadium, Barber took a no-hit bid and a 1-0 lead into the
ninth inning despite severe bouts of wildness.

Barber walked the first two batters in the ninth, then retired
the next two hitters. But he threw a wild pitch that let the tying
run score and, after yet another walk, was pulled from the game.

Stu Miller relieved, and the Tigers scored the go-ahead run on
an error. The Tigers wound up winning 2-1 despite getting no hits.
Barber's line that afternoon: 8 2/3 innings, 10 walks, two hit
batters, a wild pitch and a throwing error.

A hard-thrower, Barber led the majors in walks and also topped
the AL in wild pitches as a rookie. The next year, in 1961, he
pitched eight shutouts and tied for the major league lead with
Camilo Pascual.

Born in Takoma Park, Md., Barber signed with the Orioles when he
was 18. Barber spent three seasons in Class D ball before jumping
to the majors in 1960 as was part of the "Baby Birds" staff that
included Milt Pappas, Jack Fisher and Chuck Estrada, all of them in
their early 20s.

Barber was 28 when the Orioles won their first World Series with
a whole new staff of aces in their early 20s -- Jim Palmer, Dave
McNally and Wally Bunker.

Barber won 10 games as a rookie and won at least 10 games in six
of his first eight seasons in the majors.

The Orioles said the funeral would be private and that plans for
a memorial service were incomplete Monday.