LOS ANGELES -- The "Holy Grail of baseball cards," the
famous 1909 Honus Wagner tobacco card once owned by hockey great
Wayne Gretzky, has sold for a record-setting $2,350,000, the seller
of the card said Monday.

The anonymous buyer has only been identified as a Southern
California collector. SCP Auctions Inc., a company that holds
sports memorabilia auctions, said it bought a small share of the
card. It is scheduled to be shown at a news conference at Dodger
Stadium Tuesday. 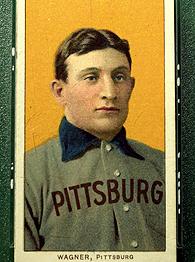 There are about 60 of the tobacco cards in existence featuring
the Pittsburgh Pirates shortstop, one of the first five players to
be inducted in Baseball's Hall of Fame.

"This particular one was preserved in spectacular condition,"
said Joe Orlando, president of Professional Sports Authenticator of
Newport Beach -- the company that certified the authenticity of the
card. "It's the Holy Grail of baseball cards."

Still, the Wagner cards are so rare that even tattered ones will
sell for hundreds of thousands of dollars, Seigel said.

The others "you could stick in the middle of the street and let
cars drive over it through the day, take it in your hand and
crumple it up, and it still would be a $100,000 card," said
Seigel, CEO of Emerald Capital LLC, an asset management company,
who lives in Las Vegas.

During his ownership of the card, Seigel displayed it at several
sports collectible shows, showed it at the Ronald Reagan
Presidential Library and Museum and brought it to opening bell
ceremonies for the NASDAQ stock exchange in New York.

"The Wagner card gave me a tremendous amount of pride,
excitement and pleasure," he said. "I hope the new owner will
have the same satisfaction I enjoyed over the years."

The tobacco cards used to be included in packs of cigarettes.
Collectors believe Wagner's cards are rare because he stopped
allowing the American Tobacco Co. to use his image, fearing it
would encourage children to smoke.

Nicknamed the "Flying Dutchman," Wagner was the National
League batting champion in eight of his 21 seasons and finished his
career with a lifetime .329 average. He retired in 1917 with more
hits, runs, RBIs, doubles, triples and steals than any National
League player.