SURPRISE, Ariz. -- Now that more than 20 months have passed, Adam Greenberg can tolerate the teasing.

"So this is the head that made 'SportsCenter?'" a teammate jokes.

Greenberg smiles. The 26-year-old center fielder is now in the Kansas City Royals organization. He's been in camp just a few days but already word has spread. He knew it would.

His story is too incredible for it not to.

Greenberg got the call in a motel room in Knoxville, Tenn. He was sitting on one bed, his Double-A teammate and good friend, Matt Murton, sitting on the other. Both were being promoted to the big leagues.

The next day, Murton was the Cubs' starting left fielder against the Marlins in Florida. Greenberg would make his major league debut the following night, July 9, 2005, pinch hitting in the ninth inning.

"I couldn't stop smiling," Greenberg says. "I just was so happy to be there."

Greenberg stepped to the plate feeling surprisingly calm. Before he dug into the batter's box, he stopped to look around. He saw Marlins center fielder Juan Pierre shading toward left center. He glanced at the infielders, then at the pitcher, a tall, hard-throwing lefty Greenberg knew nothing about.

A few rows behind the plate, Greenberg's parents and three of his four siblings watched proudly.

"I see him getting up, and I take a picture," said Greenberg's mother, Wendy, who rarely goes anywhere without a camera. "I see the pitcher winding up and I got a picture then I said, 'I'm just going to watch,' and that was  I watched."

The first -- and only -- pitch of Adam Greenberg's major league career was a 92 mph fastball to the head.

"It was a loud, echoing thud," Murton says.

"It was horror," Wendy Greenberg says. "I was so close that I heard the sound  next thing I saw was him on the ground."

Valerio de los Santos, who threw the pitch, saw Greenberg on the ground, "then I saw that I didn't break the helmet, I was like, 'It's probably not that big of a deal.'"

It had slammed directly into the back of his head.

"The first thing going through your mind is, 'This guy's dead,'" de los Santos says.

"I mean honestly, the thing that was running through my head was just stay alive," Greenberg says. "I couldn't control my eyes. They rolled in the back of my head. My head swelled up. I thought it was cracked open. I grabbed my head instantly because I really felt like I was holding it together."

Doctors told Greenberg, who was 24 at the time, he had post-concussion syndrome. Greenberg thought it was something more.

"Just bending over to tie my shoe left me with headaches for hours," he says. Three weeks later, determined to get back to the big leagues, Greenberg told the Cubs he was ready to return to Double-A West Tennessee to rehab. Doctors agreed. The plan was to rejoin the Cubs at Wrigley in a few days. It didn't happen.

"I was playing right field and I remember telling the center fielder, 'If a ground ball is hit to me, I'm in trouble,' because every time I look down my eyes were literally shifting side to side," he says. Greenberg says the episode took place in one of his first games back.

"Then in the eighth inning, I remember a ball came out there and it just started snaking on me, it started moving. It hit off the heel of my glove and I came into the trainer and I just told him  I just couldn't do it."

That was enough to scare Greenberg's father, Mark. 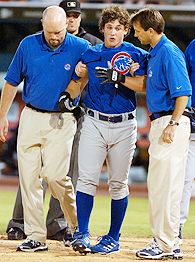 "At that point I stopped worrying about whether he was going to be able to play baseball," Mark Greenberg said. "I was really beginning to worry about the quality of his life."

For weeks, Adam Greenberg slept upright. It was frustrating, but the only way to tolerate the excruciating headaches. He visited doctors -- 10 in all. The first nine didn't have an answer. Finally, a doctor at the Mayo Clinic diagnosed Greenberg with positional vertigo, a condition often caused by a head injury that triggers nausea, dizziness and severe headaches.

Greenberg's once-promising 2005 season was over.

"I can't imagine what he was going through dealing with the fact that he was there and he was about to get that opportunity and to have that happen and it was out of his control," says Murton, who has been in the big leagues ever since.

By 2006, Greenberg was symptom-free but struggling badly. In June, hitting below .200 and with his playing time dwindling in Double-A ball, he asked the Cubs to release him. They did. He played the rest of the season in the Dodgers system, where his struggles continued. Physically, his head was fine. Mentally, he still wasn't healed.