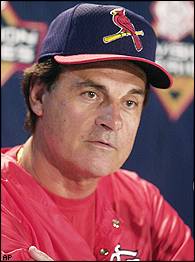 "I'm not sure what type of statement to give," La Russa said after his team's 2-1 spring training loss to the Florida Marlins on Thursday. "I've been scribbling stuff.

"Last night's situation is the opposite of feeling good. It was an embarrassment, so I apologize to anyone who is close to me, members of the Cardinals organization, our fans. I regret it, take responsibility and I'm not sure there is anything else I can say," he said.

Undercover officers saw La Russa's SUV sitting partially in an intersection around midnight and not moving despite two green lights, police said. Officers knocked on the window and La Russa did not initially respond.

The SUV was in drive and running, with La Russa's foot on the brake, police said. When he woke up, the officers asked him to get out of the SUV. La Russa was cooperative during his arrest, police said.