PHILADELPHIA -- Boston Red Sox icon Johnny Pesky will have
to leave the dugout during games this season because of a major
league rule that limits the number of coaches allowed in uniform. 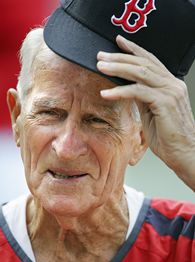 Red Sox manager Terry Francona said the team was told by the
commissioner's officer it will enforce the rule that limits
uniformed personnel in the dugout to players, managers, and six
coaches. Francona said the Red Sox received a stern letter from
baseball threatening substantial fines.

"They warned us so many times, I think they got tired of it,"
he said Friday before the Boston's exhibition game against the
Philadelphia Phillies. "I've seen the letters in the past."

Pesky took the news hard when Francona told him this week.

"I sat down with him and talked with him about, and he was
hurt," Francona said. "I understand. But the rules are what they
are."

The story was first reported Friday by The Boston Globe.

"It's not a new rule. It's been around for some time," said
Joe Garagiola Jr., a senior vice president in the commissioner's
office. "It is certainly not aimed at any one club or one
individual."

The rule also applies to non-baseball staff, including
interpreters. The Red Sox will be allowed to use Masai Takahashi, a
member of the training staff, to translate for Japanese pitchers
Daisuke Matsuzaka and Hideki Okajima, Red Sox spokesman John Blake
said.

The 87-year-old Pesky has been with the ballclub for 57 years as
a player, coach and manager.

"It'll break his heart, but a lot of us in the game of baseball
get our hearts broken every once in a while, anyway," said Los Angeles Dodgers manager Grady Little, who managed the Red Sox for
two seasons. "We're faced a little bit with the same situation
here in L.A. with Manny Mota. Everyone has so much respect for them
because of what they've done in the game. And it's instant respect,
every time they say anything to anyone to try to help them out."

Pesky played for the Red Sox from 1942-52, missing three years
during World War II, before brief stints with Detroit and
Washington. He had a career average of .307 and set the club record
with 205 hits as a rookie that stood until Nomar Garciaparra had
209 in 1997.

"I think that's a tragedy coming from Major League Baseball. I
really do, because I know what it means to Johnny," said
Garciaparra, who represented the Red Sox in five All-Star games and
is starting his second season with the Dodgers. "It means so much
to him to be able to put that uniform on every day and being in
that dugout. I know that having him around just meant the world to
me when I was there. ... Maybe they can make an exception for
certain people who have worn their respective uniforms for so
long."

The right-field foul pole at Fenway Park, which is just 302 feet
from home plate, came to be known as "Pesky's Pole" for his
ability to turn short line drives into home runs; the team made the
name official last year.

Pesky also managed the team in 1963-64 and has served as a coach
for decades. The previous Red Sox ownership banished him from the
dugout in '97, but that policy was reversed when the group led by
John Henry and Tom Werner took over in 2002.

"I think his time has come," Little said. "When you get to
the age of Johnny Pesky, his reaction time is not like it used to
be, so you're concerned with Johnny's health -- not only in the
dugout during the game, but also during the workouts when he's out
on the field. It's a tough situation, but I'm going to have to
agree with Major League Baseball."