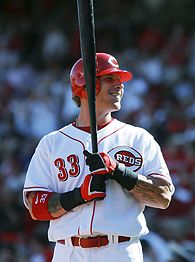 By the time his name was announced as a pinch-hitter at Great
American Ball Park, the crowd was on its feet for an extended
ovation that made him back away from the plate and break into a
broad smile.

In that moment, he hadn't done anything yet as a major leaguer.
His at-bat in the eighth inning of the Cincinnati Reds' 5-1 victory
over the Chicago Cubs on Monday was the first of his career.

It's what he had already accomplished in his personal life --
getting his cocaine addiction under control, getting his life back
on track -- that made the crowd of 42,720 stand and cheer.

Hamilton flied out to left field in his first major league
at-bat, then got another cheer when he headed back to the dugout.
His teammates walked over to congratulate him -- just for being
there.

"I never saw anybody more excited in my life," said outfielder
Adam Dunn, who hit two homers Monday and was the only player to get
a louder ovation. "He deserves every single bit of it, if not
more."

More will come for a player who was a fan favorite before he
arrived.

Cincinnati obtained the 25-year-old outfielder in December,
providing the former No. 1 draft pick a chance to prove he could
stay clean and still play. Hamilton was out of baseball from
2003-05, when it appeared addiction had ruined his life.

"I've never been part of anything like that. The way I'm feeling
is hard to describe."
-- Josh Hamilton

He stopped using drugs in October 2005, got baseball's
permission to play in a few minor league games last summer, and
then got another chance from the Reds, who thought he was worth it.

"If everything we were hearing about off the field was true --
we had every reason to believe it was -- you just don't walk away
from a guy with his upside and his athletic ability," general
manager Wayne Krivsky said.

Hamilton was one of the Reds' best players in spring training,
hitting .400 most of the way while making one top defensive play
after another in the outfield. By the time he arrived in Cincinnati
for the opener, he was the No. 4 outfielder and the talk of the
town.

Much of that is due to Hamilton's willingness to share the story
of his struggles. When he showed up for the start of spring
training in Sarasota, he talked openly about the eight stints in
drug rehab and his struggle to overcome addiction.

That's why they're rooting.

"Everybody knows the story," manager Jerry Narron said. "I
think they appreciate the fact that he's always been completely
accountable. He's an honest young man.

"We're going to try to get him on the field as much as
possible. He's got the kind of organization-changing talent that
they haven't had here in a while."

Just getting on the field was a breakthrough.

He got a loud cheer when he was introduced with the rest of the
team before the season opener. When fighter jets flew overhead as
part of the festivities, Hamilton looked up and misted up. He had
finally made it.

"I just started tearing up when the planes flew overhead," he
said. "That was it."

That was just the start.

His pinch-hit appearance brought tears again. Sitting behind
home plate, his wife stood and cheered with the rest of the fans.
More than any of them, Katie Hamilton understood what the moment
meant.

"I said, 'There's my handsome!"' she said, using a term that
made Hamilton avert his eyes. "That's what I call him. I am proud
of him. But I'm more proud of him for being the man I always knew
he could be off the field. Baseball is just a bonus."

Katie Hamilton is just learning about the ways of big-league
baseball. Until he got over the drugs and started playing again,
her husband didn't tell her much about it.

"When I was out of baseball, we never talked about baseball,"
he said. "I was away from the thing I loved to do, and I didn't
want to watch it."

Now, baseball is watching him.