One strike away from being an official game,
the Cleveland Indians' home opener against the Seattle Mariners was
postponed Friday night when daylong snow wouldn't stop.

The teams had planned to play a day-night doubleheader on Saturday, but heavy snow has changed those plans. One of
the games will be made up Sunday as part of a regular doubleheader, beginning at 1:05 p.m. ET.

The Indians were leading 4-0 with two outs in the top of the
fifth, when the umpires halted play for the third time. The first
pitch had been delayed for nearly an hour because of the winterlike
weather. 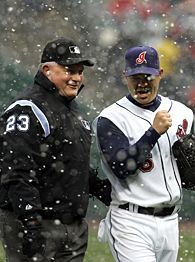 Crew chief Rick Reed called the game at 8:41 p.m. -- 4 hours and
36 minutes after the scheduled first pitch -- ending a strange day
and night when the grounds crew spent more time on the field than
any of the players.

In addition to a 57-minute delay at the start, the game was
interrupted for 22 minutes, 17 minutes and finally for 1:17.

At one point, Reed summoned Indians manager Eric Wedge and
Seattle's Mike Hargrove to the umpire's dressing room to figure out
what to do. Earlier, the two managers had a heated on-field
discussion.

Indians starter Paul Byrd was just one out away from getting
through the fifth inning and possibly being credited with an
abbreviated no-hitter when the relentless snow dumped on Jacobs
Field again.

Protecting a 4-0 lead, Byrd had walked the bases full and was
ahead 1-2 on Seattle's Jose Lopez when Hargrove, known during his
playing career as "The Human Rain Delay" because of his slow
ritual at the plate, came out of the dugout to complain about the
conditions to plate umpire Alfonso Marquez.

That brought out Wedge and the two skippers had an animated
discussion while Byrd tried to stay loose by throwing pitches.
Finally, after the visibility worsened, Reed brought the Indians
off the field.

On his way to the dugout, Byrd flipped the ball into the crowd,
which had booed during the time Hargrove and Wedge were going at
it. As he left the field, Hargrove, who managed the Indians from
1991-99, stopped to verbally engage with some fans.

Whatever Hargrove was trying to do to slow the game down, it
worked perfectly. Moments after he began later, near white-out
conditions enveloped the Jake, leading to the day's longest delay
when Reed walked onto the field behind home plate and waved the
game off.

Because this is the Mariners' only trip to Cleveland, and
with a weather forecast calling for more snow and cold, the Indians
had to do all they could to get the game in. But they did so at the
expense of their own fans, most of whom headed home long before the
postponement came.

The first pitch was pushed back 57 minutes because of wintry
conditions that had Indians fans bundled up as if they were at a
Browns-Steelers game in mid-December.

In the hours leading up to the start, snow fell delicately, blew
sideways and generally swirled around the Jake, turning the
43,000-seat ballpark into the world's largest snow globe.

Working non-stop, the Indians' grounds crew used leaf blowers to
clear the outfield grass, which at one point had at least an inch
of accumulation. But every time they got it swept off, the snow
returned.

About two hours before game time, a few of the Mariners spelled
out "WIN" in the snow covering right field, and someone built a
small snowman just beyond the infield tarp near second base.

By the time the game got under way, though, the snow had slowed
to flurries and other than being bitterly cold, it was time to play
ball -- for a little while. A heavy band off Lake Erie twice stopped
action in the second inning for a combined 39 minutes.

Game notes
During the delay in the second, Bing Crosby's "White
Christmas" was played over the stadium's sound system. Also, a fan
ran onto the field and left a snow angel in right-center before
being arrested. ... The Mariners celebrated their 30th anniversary
Friday. The club played its first game on April 6, 1977, a 7-0 loss
in the Kingdome to the California Angels.