WASHINGTON -- The Washington Nationals wore Virginia Tech baseball caps during Tuesday night's game against the Atlanta Braves as a tribute to the victims of Monday's shooting rampage at the school. 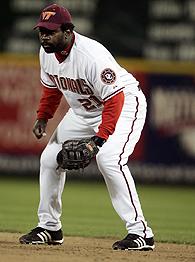 "It was an honor to wear that hat," Washington center fielder Ryan Church said after his team's 6-4 loss. "Our thoughts and prayers go out to the victims and their families."

Left fielder Chris Snelling's cap will be sent to the Hall of Fame in Cooperstown, N.Y., while Acta and some players autographed their hats, which will be sent to Virginia Tech.

"The Nationals have you in our hearts and in our prayers," relief pitcher Chad Cordero wrote above his signature.

The Nationals said the idea of wearing the Virginia Tech caps came from a fan from Calvert County, Md., who e-mailed team president Stan Kasten.

The Nationals held moments of silence for the victims of Monday's shooting before their home games Monday and Tuesday. Washington's RFK Stadium is a drive of about 4 hours from the university's Blacksburg campus.

"This happening in our backyard, we're more sensitive to this than anybody," Kasten said.

"It was special, especially for me, them kind of being the school we always wanted to beat, more than anybody else," Zimmerman said. "It kind of shows you how little sports mean. ... It makes you realize how lucky we have it and not to take any days for granted."