Manny Ramirez, J.D. Drew, Mike Lowell and Jason Varitek
connected in a span of 13 pitches during the third inning against
Chase Wright, who was making his second major league start for New
York. 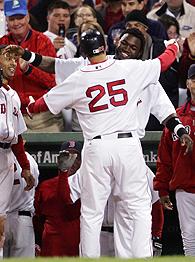 The Red Sox became the fifth team in major league history to hit
four consecutive homers. The Los Angeles Dodgers did it on Sept. 18
last season against San Diego -- and Drew hit the second homer in
that outburst as well.

Wright was only the second pitcher to give up four home runs in
a row. Paul Foytack of the Los Angeles Angels did it on July 31,
1963, in the sixth inning of the second game of a doubleheader
against Cleveland. One of those homers was hit by Tito Francona,
the father of current Red Sox manager Terry Francona, who
celebrated his 48th birthday Sunday night.

Varitek's homer gave Boston a 4-3 lead. It was the second homer
of the season for all four players.

Wright retired his first two batters in the third. After
Varitek's homer, he ended the inning by striking out Wily Mo Pena
but was replaced by Colter Bean to start the bottom of the fourth.

Wright tied a major league record for most homers allowed in an
inning. He was the first pitcher to give up four since
Randy Johnson of the Yankees on Aug. 21, 2005, against the Chicago White
Sox.

Ramirez hit a 2-1 pitch and stood at the plate as the ball
sailed to the back of the Green Monster seats in left-center. Drew
followed with a long shot into Boston's bullpen in right field on a
1-2 pitch.

Lowell then drove a 1-1 pitch out of Fenway Park over the
left-field seats. Varitek hit a 1-0 pitch into the left-field
seats, giving starter Daisuke Matsuzaka the lead.

Wright never pitched above Class-A before this year. He made two
starts at Double-A Trenton this season before making his big league
debut Tuesday against Cleveland. In his first game, he gave up one
homer and three runs in five innings and got the win in a 10-3
victory.

The Red Sox became the third AL team to hit four consecutive
homers. The previous one to accomplish the feat was the Minnesota
Twins on May 2, 1964, against the Kansas City Athletics.

Boston also tied a club record for most homers in an inning,
doing it for the 10th time.