TAMPA, Fla. -- Roger Clemens could pitch for the New York
Yankees as early as May 28 in Toronto.

"I think anything is possible," said Clemens, who's expected
to make the first of two minor league starts Friday. "If I come
out of the first two decent, they'll pull me aside, and we'll all
visit about that for sure. I don't think it's out of the
question."


"I have the same question you all do, is my body going to hold up? I can't answer that. All I can do is do the work and get ready for that."
-- Roger Clemens

Just two starts in the minors would pit the 44-year-old against
the Blue Jays on May 28 or 29. The next time through the rotation
would have Clemens pitching at AL East-leading Boston on June 2 or
3.

"I think I'm right where I need to be to get this under way on
Friday," Clemens said. "Endurance and conditioning, I think I'm
very close. I've got to get in a game as quick as possible, and
I'll have a good telltale sign of what happens on Saturday
morning."

When he rejoined the Astros last year, Clemens agreed to a
contract on May 31, made three minor league starts and returned to
the majors on June 22. 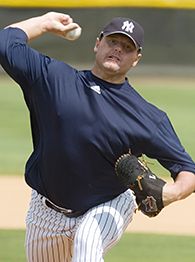 Clemens, who agreed to a $28,000,022, one-year contract on May
6, worked out last week in Lexington, Ky., where his son plays for
a Houston Astros minor league club.

"I'm getting closer," he said. "I want to be able to perform
like I'm supposed to. Hold up my end of the deal. That's the
pressure that comes along with it. I have the same question you all
do, is my body going to hold up? I can't answer that. All I can do
is do the work and get ready for that."

"My understanding is his arm is fine. There's no issue with the
arm. it's just being able to compete out there and that takes
legs," Yankees manager Joe Torre said in Chicago.

"I think what you'll find out in the next two or three starts
is where he is conditioning-wise as far as competing. Roger never
lets himself stray far from being able to play."

"I enjoy teaching," Clemens said. "I enjoy working with them,
talking to them and trying to answer their questions. I give them
credit, they've asked some really detailed questions."

The seven-time Cy Young Award winner started his workout by
jogging through the area around the complex. He also took part in
fielding drills during his hour on the field.

Clemens said he has no idea if this will be his final season.

"How can I answer that?" Clemens said with a smile. "I'm
doing so great at retirement. I've been telling you for what, how
many years now? I wish I knew that."

Notes
Clemens said he has talked with Yankees owner George
Steinbrenner, who lives in Tampa, but hadn't seen the Boss in
person. ... Clemens said he has not been contacted by
representatives of the Mitchell commission, which is investigating
steroids use in baseball. "I don't know anything about that,"
Clemens said. ... Hughes, on the 15-day DL with a hamstring injury,
has started a running program. He hasn't reached the point yet to
where he can throw off a half-mound.