During the offseason ESPN surveyed Hall of Fame voters and found that only 20.4 percent would have voted for Sammy Sosa if he'd been eligible.

Now that Sosa has become the fifth player in major league history to reach 600 home runs, some of ESPN.com's writers and contributors assess Sammy's Hall candidacy one more time.

Do you think Sammy Sosa is a Hall of Famer?

Jim Caple: Yes
At this point, it's hard to see me not voting for him, though I can't say I'm as enthusiastic about him as I have been about others. Not because of any steroid allegations, but because his numbers were inflated by the era in which he played (unlike McGwire, who had his first monster year before the explosion in offense, when 49 home runs was still a lot). 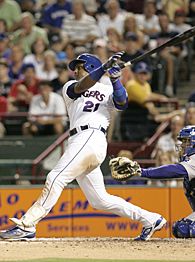 Jerry Crasnick: No
If I had to vote on Sammy Sosa for the Hall of Fame at this very moment, I would say no. Sosa deserves to be in Cooperstown based on his numbers, but I'm applying the same argument to Sammy Sosa that I used for Mark McGwire. If Barry Bonds is neck deep in the steroid controversy and McGwire is waist deep, then Sosa is, at the very least, knee deep. I'm really uncomfortable with the thought of voting somebody in to Cooperstown, then finding out he engaged in some sort of transgression that would make me think twice. I want the Mitchell investigation and the surrounding uncertainty to play out before I commit to players with red flags. Maybe I'll feel differently when Sosa actually goes on the ballot, but right now my answer is no.

Tim Kurkjian: Yes
Sammy Sosa is a Hall of Famer. There is no definitive proof about his alleged steroid involvement, so in the absence of hard evidence, his numbers are what we go by, and they are of Cooperstown quality. He has the fifth-most home runs in baseball history. From 1995 to 2004, Sosa hit 479 homers, the most at that time for any 10-year period in history. He holds the NL record with six consecutive seasons of at least 40 home runs; only Babe Ruth, with seven, has a longer streak. There have been eight 60-home run seasons in history, and Sosa has three of them. Sosa hit more homers at Wrigley Field than Babe Ruth hit at Yankee Stadium. For a few years, he was the Cubs. In 2001, he had 160 RBIs, 94 more RBIs than anyone on his team, demolishing the record for largest disparity in RBIs between a team leader and the runner-up. He got caught with a corked bat and was exposed at the end of his time in Chicago for not being a good teammate. But sometimes, the numbers overwhelm all else. And that is the case with Sosa.

Keith Law: Yes
Well, I don't exactly get a vote, because the BBWAA still thinks the Interweb is just a fad, but I think Sosa is a Hall of Famer. I guess I'd say that I just don't see the counterargument. He was one of the best hitters in baseball during his peak, has huge bulk totals, and won an MVP award (which he didn't deserve, but whatever). Never tested positive for any PEDs, so if that's a voter's counterargument, he should lose his right to vote in future elections.

Buster Olney: Yes
Only four players in baseball history have hit more home runs than Sammy Sosa, and he will finish his career ranked in the top 20 in RBIs. Of the six greatest single-season performances in home runs, Sosa has three. He's been an All-Star seven times, and ranked in the top 10 in MVP voting in seven different seasons, including 1998, when he won the award. Unless we have anything close to a full understanding and context of the steroid era, I have a very hard time effectively giving Sammy Sosa -- or any other player -- my own personal lifetime ban by refusing to place his name on a Hall of Fame ballot. I will vote for him.

Sammy Sosa is a Hall of Famer. Slam dunk. There is no smoking gun with him. There is just guilt by association. Just because he kept pace with Mark McGwire in home runs in 1998 doesn't mean he should be seen the same way as McGwire. Sosa made a statement in front of the House Committee on Government Reform in which he declared he had never used illegal performance-enhancing substances while McGwire did not. There are no former teammates pointing fingers at Sosa like there are at McGwire. He has never failed a drug test. In fact, consider that Sosa did get busted for corking a bat during his playing days. Why would a player on steroids cork his bat? He wouldn't. Sammy Sosa is one of the most charismatic players to ever play the game during his prime. He will most likely end up with the fifth-most career homers. He is a first-ballot Hall of Famer if there ever was one.

Enrique Rojas: Yes
Even in a discredited and stained era due to the use of performance-enhancing drugs, 600 is a large sum. Not only is Sammy Sosa fifth all time among home run hitters, but he was also a star who helped increase the sport's popularity when he had his epic home run battle with Mark McGwire in 1998 and 1999. Inevitably, Sosa's name is commonly noted every time we speak of the rampant use of steroids in baseball, but the American society is based on the assumption that everybody is innocent until proven guilty. So as long as Sosa isn't found guilty for violating any established rules, then his numbers should be the sole argument to consider in order to open wide for him the doors of Cooperstown.

Jayson Stark: Yes
I don't like declaring how I'm going to vote five years before the ballot shows up. So I'll just express how I'm leaning now. As I've said before, I'm trying to take a consistent stance on all members of that generation. So my position on Sammy is essentially no different than my stance on Mark McGwire. As I wrote when I voted for McGwire, I don't feel comfortable casting votes based on assumptions. Or popular opinion. Or messy appearances before Congress. Or who got named in Jose Canseco's book. If I withheld votes for players who fit those criteria, I shouldn't vote for anybody from that era. There were so many players taking something, I don't know how to pick and choose without more facts. So if I had to vote today, I'd vote for Sammy. But I reserve the right to change my mind if we all know a lot more, about him and everyone else, when the ballot arrives.