Editor's Note: The following is an excerpt from "The Stark Truth: The Most Overrated and Underrated Players in Baseball History" by Jayson Stark. Copyright (c) 2007 by the author. This excerpt has been printed with the permission of
Triumph Books. For information on how to purchase the book, click here. 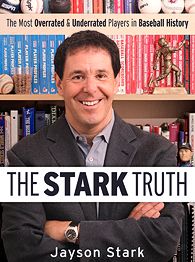 I was sitting in a makeshift press box in the grandstand of Yankee Stadium on October 20, 1996, the night the Legend of Andruw Jones erupted on America's stage.

I'll never forget it. In the first at-bat of the first World Series game this 19-year-old kid from Curacao had ever seen, let alone played in, the phenom pounded a home run halfway to White Plains. One inning after that, he creamed World Series home run number two. That one landed in Monument Park, right in front of Mickey Mantle's No. 7.

Did Andruw Jones know how to make an entrance, or what?

There is a feeling we get when we watch an exhibition like this that defines why sports have such a magnetic pull on our souls. So many exhilarating thoughts explode inside our brains. Where did this guy come from? How do you spell C-U-R-A-C-A-O? Had anyone else ever done anything like this?
And then you contemplate the most exciting question of all:

Could something even better possibly be yet to come?

Was there any doubt that night that Andruw Jones was destined to be anything other than one of those special, charismatic, must-watch athletes who would tug us in his direction for however many more years we were lucky to have him around?

He had just become the youngest player in history to hit a World Series home run, wiping someone named Mickey Mantle out of the record book. Counting his final swing of the National League Championship Series, Jones had just joined Reggie Jackson as the only men to hit October home runs in three consecutive at-bats. He was still a teenager. And this part of his game -- offense -- wasn't even the part he was best at. Phew.

His general manager, John Schuerholz, dropped his name into the same sentence as Hank Aaron that night. Was that where Andruw Jones was heading? Whoa.
Well, here it is, more than a decade later. And this guy owns nine Gold Gloves, more than any center fielder in history except Willie Mays (12) and Ken Griffey Jr. (10). There is also a 51-homer season on Andruw Jones's page in the Baseball Register. And five All-Star teams. And five 100-RBI seasons. All before he'd even turned 30.

So it's probably right about now that you're checking the beginning of this chapter to make sure that this fellow was really listed under the heading "Most Overrated Center Fielder of All Time." Yep. Sure was.

Which means you very well could be thinking next that anyone who would put something that debatable in an actual book must be the Biggest Mush Brain of All Time. Yep. Could be. But there is an explanation for this. I promise.

We'll start with a major confession: of all the chapters in this book, none came tougher than this one. That's because of what center field represents within the fabric of baseball. It's the position of Mays, Mantle, and DiMaggio. Of Cobb, Puckett, and Griffey. Those aren't just names on a lineup card. Those are names that conjure up magic. This is the glamour position in baseball. Nothing else is close.

So when it came time to pick the most overrated center fielder of all time, I found myself sifting through some truly spectacular names. You wouldn't believe some of the center fielders I considered, who were nominated by people all over the sport. The most astonishing name was this one: Joe DiMaggio. And I'll admit this now. I thought about it. 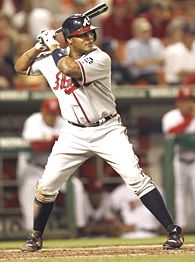 My first instinct undoubtedly matched your first instinct: what dope could make a coherent argument that Joe DiMaggio was overrated? Then I stopped. And mulled it over. If the essence of this book is its continuing quest to draw a big black line between myth and reality, then all the myths surrounding DiMaggio made him a player who could conceivably fit this debate.

Then, luckily for me, sanity kicked in. And not a paragraph too soon. Nine World Series won. The Hitting Streak. The fourth-highest slugging percentage (.579) of any retired right-handed hitter in history. Marilyn ... What the heck. Was I nuts or something?

Then an old scout friend said the words that led me here: "I'll tell you the guy who isn't the player people think he is anymore -- Andruw Jones."
Again, my first instinct was: no way. Then I took a closer look. And couldn't believe what I learned.

Andruw is a man who has built his reputation around his Gold Glove parade, his exceptional ability to glide around center field and suck sure-thing doubles out of the sky without overheating a single sweat gland. But while most of us weren't paying attention, Andruw was slowly, apparently imperceptibly, losing the part of that gift that made him special.

I thought: that can't be right. A friend suggested maybe it was a function of the Braves' pitching staff. Maybe they were just throwing fewer fly balls than they used to. Great point. So I checked. Fortunately, there's a stat that measures that, too -- zone rating (the percentage of balls fielded by a player in his typical zone).

So I called up the 2006 zone rating of all qualifying major league center fielders on ESPN.com. Guess who was last on the list? Yessir, Andruw. He also finished last in 2004. And fifth from the bottom in 2005. I kept checking. As recently as 2001, he led his league in zone rating. So obviously, we had a definitive trend on our hands. I then went back to the scout who started all this to report my findings.

I surveyed other scouts. They'd begun to see the same things. Not getting the same jumps. Not reacting. Not putting in the defensive effort he used to. His body getting thicker. A sudden obsession with home-run hitting over everything else.

"He was a great defender," said one scout. "He's slipped. People used to compare him to Mays and Mantle. I wouldn't put Andruw anywhere near those guys. Now he's become an offensive player, and his defense has suffered ever since."

Overrated-underrated isn't a study in talent. It's a study of how what we perceive differs from what's actually going on out there. And Jones was good enough to turn himself into a fabulous poster boy for that study.

He smoked 51 home runs in 2005, a very seductive number. But I checked every 50-homer season in baseball history. Again, I had a tough time digesting what I found.
Jones had the lowest batting average, slugging percentage, OPS, and park-adjusted OPS-plus that any player has ever had in a 50-homer season. He reached base fewer times than any 50-homer man ever. And if you take in the bigger picture, with Bill James's incisive runs-created stat, Andruw "created" fewer runs than any 50-homer man ever had. In fact, he created fewer runs that year with his 51-homer season than three hitters who didn't even have a 20-homer season -- Brian Roberts, Derek Jeter, and Brian Giles.

Yet Jones almost stole the MVP award from Albert Pujols. And, of course, he keeps raking in Gold Gloves. As if nothing had changed. As if he'd only been getting better.

"It's all perception," said one player who has played against Jones for years. "Perception is like muscle memory. People have a memory of you doing
something. So you have to do something dramatically different to undo that memory."

Willie Mays basically announced he wasn't the same player anymore when he literally began falling down in the outfield. But Andruw Jones still looks the same. There's nothing "dramatically different" about those three extra fly balls a week he now just misses tracking down. It's only when we study the numbers and chart the trends that us folks who don't watch him closely -- every day, every inning -- start to catch on.

So how did he get to be overrated? This is precisely how. Look, there are worse commodities to have on your team than 50-home-run center fielders who have won nine Gold Gloves. And when Jones gets his shot at free agency after the 2007 season, I'm sure he'll find he's highly employable. Even a declining Andruw Jones in center still beats Brian Asselstine in center at his prime. But that isn't what this book is all about.

Overrated-underrated isn't a study in talent. It's a study of how what we perceive differs from what's actually going on out there. And Jones was good enough to turn himself into a fabulous poster boy for that study.

"I'm not detracting from what he was," said the scout who first nominated Andruw. "I'm just saying his reputation carried over when he started losing that range. The myth continued. And that's really what you're writing about, isn't it? The myths of baseball?"

It almost sounds like a National Geographic special -- The Myths of Baseball. But don't consult your local listings. Consult this list, as Andruw Jones helps us Overrated-Underrated detectives apprehend yet one more mythmaker who was running around right before our eyeballs -- and we'd never even noticed.