ARLINGTON, Texas -- Sammy Sosa's 600th homer resembled so
many that came before -- except this time the Chicago Cubs were on
the other side. 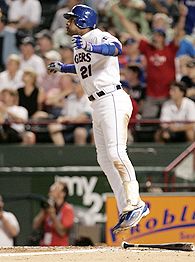 Playing for the Texas Rangers after a year out of baseball, Sosa
became the fifth member of the 600-homer club Wednesday night when
he connected against his former team.

After driving a 1-2 pitch to right-center for a solo shot in the
fifth inning, Slammin' Sammy bounced out of the batter's box with
his trademark hop and thrust his right fist into the air before
reaching first base. He was mobbed at home plate by his teammates
while the scoreboard showed pictures of all five members of the
elite club: Hank Aaron, Barry Bonds, Babe Ruth, Willie Mays and
Sosa.

No. 600 came off Jason Marquis, the 364th pitcher the
38-year-old Sosa has homered off in his 18 major league seasons.

It was Sosa's 12th homer in 62 games this season since signing a
minor league deal and making the roster in spring training with
Texas, the franchise that gave him his start and for which he hit
his first homer in 1989.

Sosa also has 52 RBIs, which ranks seventh in the American
League. He has homered against every major league team in his
career.

After going into the dugout with his teammates, Sosa came out
for a curtain call. He blew kisses to the crowd and acknowledged
the Cubs' dugout with a pump of his fist, and Chicago manager Lou
Piniella pointed back toward the slugger. Sosa had never faced the
Cubs before the series opener Tuesday night.

A countdown banner that has hung in right field for about a
month was flipped from 599 to 600 -- and a new banner was unfurled
in center field congratulating Sosa for joining the 600-homer club.

The cheering hadn't even subsided before Frank Catalanotto
followed with a homer -- the 75th of his career, to give the Rangers
a 6-1 lead.

While Slammin' Sammy has had an impressive comeback this season,
his pursuit of 600 homers was overshadowed by the Rangers having
the worst record in baseball and Bonds' chase to catch Hank Aaron
atop the career home run list.

Sosa had a similar homer drought. No. 600 was only his second in
22 games -- a span of 83 at-bats in which his only other homer was a
grand slam Friday at Cincinnati.

"Sammy's had a great career," Piniella said before the series
began. "It's maybe apropos that here the Cubbies are in town and
Sammy is going for his 600th home run. He was an icon in Chicago
for a long time, was loved."

When Sosa returned to the majors, he insisted that he was coming
back for more than the 12 homers he needed to reach 600.

"I'm going to go beyond that. I'm not going to stop there,"
Sosa reiterated this week.

A tumultuous 2005 season almost drove Sosa out of the game for
good.

It started during spring training that year when he testified
before Congress about possible steroid use in baseball, and it
didn't get much better from there. He hit .221 with 14 homers and
45 RBIs in 102 games with Baltimore before going home to the
Dominican Republic, where he stayed for more than a year.

Like Mark McGwire and Bonds, Sosa is suspected of using steroids
before they were banned by baseball, and he was caught with a
corked bat in front of his home crowd when he played for the Cubs
in 2003.

He has never been penalized for a positive steroid test,
however, and was not involved in the BALCO scandal that has dogged
Bonds.

"I'm quite sure a lot of people were skeptical about him for
many reasons," Rangers manager Ron Washington said. "But he
showed us he was serious about coming back."

Sosa is the only player with three 60-homer seasons. He hit .308
with a career-high 66 homers and 158 RBIs in his 1998 MVP season
for the Cubs -- and was part of that memorable home run chase with
McGwire, the first major leaguer to hit 70 homers.

Sosa holds the major league record by hitting homers in 45
ballparks, adding Rangers Ballpark in Arlington and two other
stadiums to that list this season. He also homered for the first
time at Cleveland's Jacobs Field and at Disney World in a series
against Tampa Bay.

The slugger was 16 when Texas signed him out of the Dominican
Republic in 1985. He was still a lanky kid in 1989 when he made his
major league debut and hit his first home run, the only one he had
in 25 games for the Rangers before he was traded to the Chicago
White Sox and later to the Cubs.